Machel's win, to me, signals the beginning of an opportunity play by William Munro to corral the marketplace for soca performance, here and globally. Conspiracy theories about who win and who should have won the competition, are irrelevant to Munro. With the tacit approval of the Government in the form of increased prize money and photo ops, and the continued reliance and sustenance by corporate sponsorship and marketing collaborations, Monro's show is de facto the biggest event in carnival, slowly inching up on the celebration of mas' itself on Monday and Tuesday as a whole. William Munro is the ultimate Soca Monarch! The contending masses outside the "all-inclusive" market that dominate the market-share of this event know who won the show. Their champions have reigned in this gayelle before with fire and hands in the air. The subliminal nod to the audience that can pay for music services as opposed to simply feting is a conspiracy theory that no one wants to tackle. 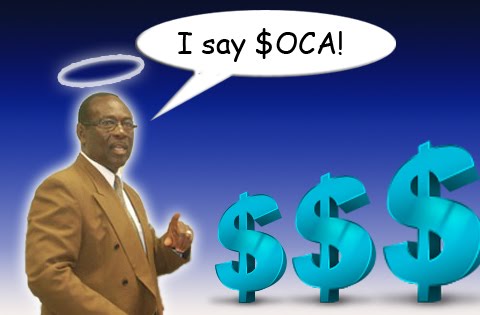 Deal with it, Panorama, Dimanche Gras, Kiddies Carnival, and most if not all fetes pale in comparison from a marketing and profitability point of view, and the intangibles like continuous feedback and communication, social impact and sustainability, brand enhancement, etc. This year's show had effectively the biggest stars in the world of soca, and results that bear noting. The top four winners in each competition, and throw in Shurwayne out of respect, command top dollar in every Carnival associated event for years now. Monro's boast that this years show was the biggest was not lost on potential partners overseas.

I believe he has gone clear of Trinidad and Tobago and the region, and is looking at the US market for growth and brand awareness for the artform. It has been a fixture on recent Soca Monarch shows to have foreign, notably African American celebrities as colour commentators for the international feed. I don't see this as a sellout, but as a foray into the BET marketspace in the US, a sizable market with millions of US dollars at stake. Get the show right, and you will get some of that "cheddar." Soca is world music, and Monro wants to be at the head of the table when the next big thing out of the Caribbean takes centre stage. He can do better than the bogus agglomeration of soca by Eddie Grant called "ring bang". So many little bites since the Andrew Sisters' "Rum & Coca Cola" in the 1940s to Belafonte's "Calypso" album in the late 1950s, to "Hot, Hot, Hot" and "Who Let The Dogs Out" on the US pop and dance charts and Grammys, but never from a Trinidadian or a Tobagonian. This crop of stars has the commercial appeal to make a space that Kevin Lyttle left so recently.

One hand don't clap; it's the promoter who is the beneficiary of the "idea" of $2 million dollars, not the artiste. The equal sum went to Panorama , Calypso Monarch, Chutney Monarch. (What is the Road March reward? I can be advised on this one.) Munro and the Soca Monarch, in my estimation, don't have an exclusive with the government. There is no political connection moreso that this Prime Minister and her team need to be seen to be inclusive of "de culture." That old state interventionist posture of the benefactor giving alms to the "amateur" as an adjunct to tourism in the guise of assisting in Arts. Anand Ramlogan knows nada about soca and calypso but comments at will. To be seen doing something for Carnival and other cultural products of this country is good politics. Having Gypsy at your side adds legitimacy, even at the expense of competence. 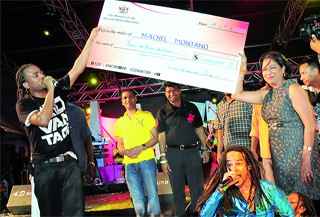 The sight of Kamla presenting the $2 million cheque to Machel at Girl Power Fete tells me of the public relations factor still evident in the campaign promise to reward carnival competitions with untold riches as a sham and the continued conduit for favours unasked but expected. Kamla gone Girl Power? To do what? On camera? Even VS Naipaul and Derek Walcott had to return home when available to present themselves to President Noor Hassanali to collect their Trinity Crosses. Machel, you reach boy! For you, it's the other way around.

Machel Montano, in a recent interview with NPR Radio, said "he still hasn't achieved his ultimate goal: to carry the energy of soca beyond his island." Monro is the lynchpin and maybe saviour. Like the "savvy Svengali", Chris Balckwell and his direct connection to the explosion of reggae in the 1970s via Bob Marley, the Soca Monarch show, if well produced, can deliver, in one crucible, to a mass overseas market, the most exciting and popular soca artistes in one place in one show. They need to do it now. A few years is a long time in soca and memories are short and tastes fickle. "Saint" William Munro is a man we need to study, and learn from in the business of music promotion.
Posted by Nigel A. Campbell at 20:52