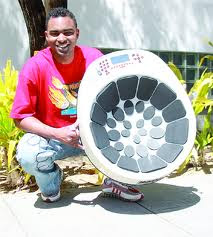 Some other innovations of the pan harken back to the original instrument, then a small instrument moulded out of a kerosene drum with a playing surface on a convex shape, and played with the hands. According to the chronnology, the rudimentary pan was played with the hands then the raw stick then padded stick. The European innovaters Felix Rohner and Sabina Schärer (PANArt Hangbau AG), started a "re-evolution", to coin a 3CANAL phrase, back to the future. Their instrument, the Hang was followed by The Halo, as well as the Hank, and its derivatives, the HAPI drum, the TurtlePan and the Zen Tambour. All are American innovations. There exists a community of "handpan" players, enthusiasts and innovators.

What has struck me about these new organic instruments is the size. Compact and portable are two features that seem to factor into the popularity of musical instruments. The size of violin versus a double bass may tell of its popularity as an instrument of learning and practice for a number of students outside the music school or auditorium space. So too, the trumpet, saxophone and many reed and horn instruments. I looked at pannist Mikhail Salcedo playing a G-pan family member instrument at Casa de Ibiza once, and was struck by its larger size relative to the conventional tenor pan that he normally plays; 26.5 inches for the G-pan compared with 23 inches in the conventional pan. Granted there was a wider range of pitches in the instruments even if there were some pitch problems on the lower notes. That evolution in pan does not seem to be moving in the direction of recent innovations in musical instrument design.

What's the phrase: "It's not the size of the instrument, but how you use it." Electronics manufacturers are churning out tablets and smart phones with 4 - 7 inch screens to view streaming movies on the go. In the right environment and space, one can view a movie on 65 inch LED screens in 3D. The same can be said of the G-pan family, as an orchestral instruments it may be apt, but the new innovations in design point to these compact "handpans", all of which are being created overseas. There is as yet no mass movement towards this class of instruments, but as the home of the steelpan, our vision should be on a horizon where anyone and everyone can buy and play a pan because it's easy to play, easy to handle, relatively inexpensive and readily available online and elsewhere.
Posted by Nigel A. Campbell at 20:51