An American in Paradise: The sense of Belonging of Andy Narell

American pannist and composer Andy Narell is an iconoclast who fearlessly challenges the narrow definitions of acceptable pan music. He is global, and his usefulness as an ambassador for our national instrument is tainted by suspicion long held by panmen and the pan fraternity in general here. It may be a an attitude of his own making. Long held beliefs are hard to dispel with logic. Pan pioneer Rudolf "Fish Eye" Ollivierre welcomed itinerant writer Patrick Leigh Fermor back in 1950 to Hell Yard, as described in his travel book The Traveller's Tree—"The ease of his manner was admirable"—implying a sense of awe and acceptance we have nurtured over the years in this region for "tourists." Narell has long ago stopped being a tourist. He is one of us and thus, prone to the same criticisms and praise as the rest of us. He is critical of our music, our Panorama and we react without obsequiousness. And rightly so, for that is the Caribbean posture, effectively practised by the panman forever; never back down from a challenge.

Andy Narell belongs to a pantheon of expatriate creative types who “belong” here and at the same time are aware of their difficulty of so belonging. Important regional authors were temporary immigrants to these shores in the mid-20th century—Edgar Mittelholzer in 1941-48, George Lamming in 1946-50, Derek Walcott in 1959-76—and their presence and experiences added to the canon of West Indian literature. Port of Spain, and by extension, the island is a place frequented by those wanderers in search of inspiration and succour. It still is a moving place designed to shape memory and ways of feeling. (Narell is temporarily resident in St Lucia now, acting as the festival patron for the 17th annual Jazz in the South in Laborie beginning on May 1, 2013.)

Read more »
Posted by Nigel A. Campbell at 12:22
An American in Paradise: The sense of Belonging of Andy Narell
2013-04-24T12:22:00-04:00
Nigel A. Campbell
andy narell|boogsie|pan jazz|Robbie Greenidge|steelpan|trinidad and tobago|
Comments

April is Jazz Month in Trinidad too¹

In a month of many entertainment options labelled “jazz”, the first weekend showcased some of the best music performances heard in these parts for a while. April has been recognised as Jazz Appreciation Month in the United States via the Smithsonian along with the UNESCO sponsored International Jazz Day culminating at month’s end with global jazz events including Trinidad.

Pianist Master Gunnery Sgt Robert Boguslaw, and double bassist Gunnery Sgt Eric Sabo—of “The President’s Own” US Marine Band—along with saxophonist Jeffrey Wills of Nashville, Tennessee were here in T&T for a second year to give jazz performances and do music workshops on the first weekend. These skilled musicians spoke the language of jazz that has not been heard locally for a while with performances reflecting the styles of Thelonius Monk, Chick Corea, even handling Etienne Charles “Santimanité” with technical aplomb. Mixing standards with original compositions, the solos captured the swing music ethos majestically with the virtuosity of the solos of a high calibre. Boguslaw's piano style is worth emulating locally as an immediate template for expansion of the genre.

Never Look Back: Brownman Ali and jazz life in Toronto

A couple months ago, I reached out to Brownman Ali, Trinidad-born trumpeter working out of Toronto, and here for a couple dates with Sean Thomas and BJ Saunders, to discuss Toronto and its jazz scene. I got no response until just yesterday evening, Friday 12 April. Coincidentally, my column on the subject came out in the Trinidad Guardian on that morning titled "Canada a haven for Caribbean musicians."

I've tried to gauge the impact Caribbean artists have had in and on the Toronto music scene. I interviewed a number of artists from Trinidad resident in Toronto over a year in a number of genres including jazz. Brownman would have been the last. The conclusion arrived at, before this new interview, was that T&T artists and their native music were having a difficult time manoeuvring the Canadian music scene to a threshold that revenue streams were sustainable. In other words, a lot of them were not making that critical impact via radio airplay and CD sales—important for global exposure—beyond anything they had when they were here, relatively speaking. Toronto is no mecca for success for the few who have gone, as implied otherwise by the newspaper headline. Shazelle, singing pop is intriguing as a case study for what is now a new phenomenon by international talent scouts and labels: come to the Caribbean, find a beautiful girl and market them as pop singers (or rappers) leaving their exotic accent to tell their story. Worked for Rihanna!

I choose today to let Brownman's statement stand by itself to allow us to understand the perspective of this immigrant—or more correctly the child of an immigrant—who has not followed the path of official multiculturalism, but like Neil Bissoondath, who on the advice of his uncle VS Naipaul, chose to "go beyond the confines of cultural heritage." One senses that Brownman, who also migrated more than half a lifetime ago, has a similar sentiment regarding Trinidad to that written in Selling Illusions: The Cult of Multiculturalism in Canada by Bissoondath : "I have no emotional attachment left...I miss nothing, am prey to no nostalgia."

Not so cool in the Great White North: Toronto and the Caribbean Jazz experience¹

Over the Carnival season recently ended, a couple Trini expat jazz musicians resident in the Great White North of Canada, Toronto to be exact, returned home for sustenance, vacation, and creative idyll. Anthony Pierre founder of Caribbean jazz outfit Kalabash and Brownman [Ali], multiple award winning and exalted trumpeter informally pressed the flesh with local musicians and fans, both outlining their plans for 2013. Their common experience in Toronto is one that can set a template for our musicians who seek favour in the big world abroad beyond the Caribbean diaspora cities. 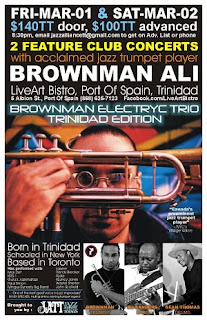 Kalabash featuring Anthony Pierre has just finished recording a new CD—its second in 12 years—and is shopping it around to the summer jazz festival promoters as it seeks to get back into the active jazz performance scene after a quiet 2012. Brownman is the epitome of a busy musician performing close to 200 dates per year when not also teaching and doing workshops. He recently returned to TT after Carnival to perform 2 small gigs with top jazz drummer Sean Thomas and bassist BJ Saunders as a trio exploring modern electric jazz originally defined by Miles Davis after his Bitches Brew period. (Full Disclosure: This writer is a producer of the annual Jazz Artists on the Greens, and both Kalabash and Brownman have been featured artists there.)

Their return led to questions of the sustainability of a music career outside of this space, especially a jazz music career. Toronto, for all it’s worth, seems to be a haven for the Caribbean migrant seeking fortune in the creative industries. Caribbean born authors have found commercial and literary success there. Canada has been described in recent times as post-ethnic and trans-cultural, so the idea that Caribbean-born musicians playing jazz influenced by their homelands to an eager market there is not unreal. It is a more open market than the introverted and prescribed US, which is genre-defined and has restricts music with jargon terms such as world fusion jazz, ethnic jazz or non-Western jazz.