On a Lighter Note: a review¹ 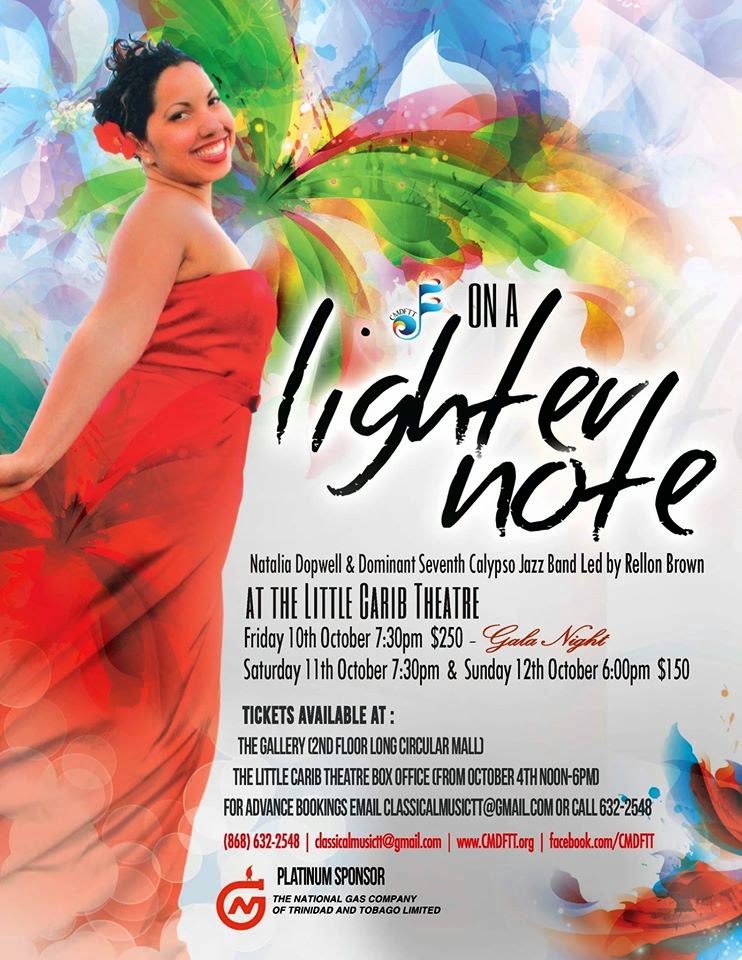 For the second consecutive Friday in October, there has been an opportunity for enhanced entertainment in Port of Spain that features a mingling and interface of jazz performance and western classical music personnel.  The Classical Music Development Foundation's production, “On a Lighter Note” at the Little Carib Theatre showcased light classical songs and jazz vocal favourites by coloratura soprano Natalia Dopwell accompanied by the Dominant Seventh Calypso Jazz Band led by trumpeter Rellon Brown. Unfortunately, this three night event was avoided by a wider audience on the gala première night therefore denying the performers a critical ovation and measure of what works and what does not.

The ninety minute show was a celebration of the film and musical theatre songs of the Gershwins (Embraceable You, Summertime, I’ve Got Rhythm), Cole Porter (Begin the Beguine, I’ve Got You Under My Skin), Andrew Lloyd-Webber (Half a Moment), as were Natalia’s takes of the show tunes from The Scarlet Pimpernel (Only Love) and Jeeves (Half a Moment) that allowed her to relax into a milieu that defined excellence.  The show was also a nod to the style of “crossover classical” made popular by another diva, Sarah Brightman. The opening song, “Man of La Mancha (I, Don Quixote)” was dedicated to activist Dr Wayne Kublalsingh; maybe a subtle jab at his solitary determination and idealism against all odds, but an apt song choice with a message that was not missed by the small audience.

The din of nostalgia: The Keate Street Jazz Octet at Martin’s Piano Bar – a review¹ 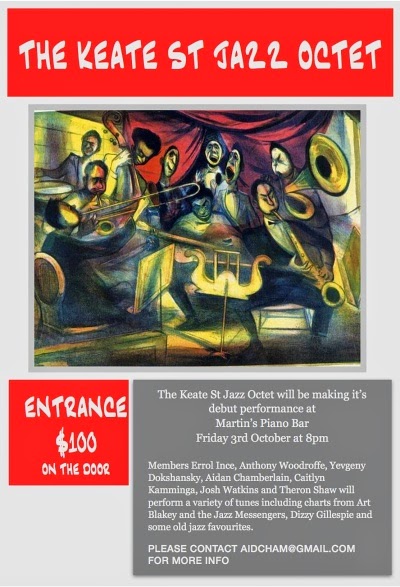 Aidan Chamberlin, assistant professor at UTT informed the small audience of about a couple dozen at Martin’s Piano Bar that the performance they were about to witness that cool Friday night (3 October) was the debut public performance of the newly formed Keate Street Jazz Octet conscripted from the staff of UTT Music department with Alea Nicholson sitting in as guest pianist. Their agglomeration was inspired by a visit earlier in 2014 by the Michigan State University jazz professors including Trinidadian trumpet ace Etienne Charles, and students. The Americans showcased the possibilities of big band and especially the octet ensembles in the context of jazz: four horns and a rhythm section can swing.

In the context of jazz in Trinidad, the audience was in for the uninspired reading of stock music charts of the jazz greats. With almost sonic perfection—one would expect no less from UTT music instructors—especially from the horn section of Chamberlin on trombone, Anthony Woodroffe, Jr. on tenor sax, Yevgeny Dokshansky on alto sax and Errol Ince on trumpet, the octet moved through a selection of early- to mid-20th century jazz standards ranging from Gershwin (Fascinating Rhythm) and Fats Waller (Ain’t Misbehavin’) to Erroll Garner (Misty) and Dizzy Gillespie (Night in Tunisia).