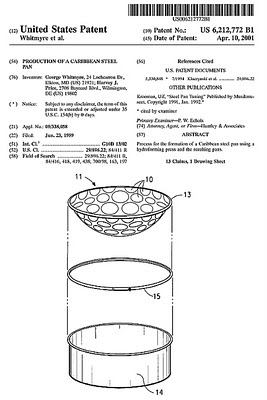 The inventors also cite as their only steel pan reference, a pan tuning book written by Swedish pan enthusiast and tuner, Ulf Kronman. And this is where things fall apart! That book on pan tuning was the first such published internationally back in 1992. At that point, we failed to recognise the slow release on the grip of ownership of the idea and culture of pan. Collateral material—books, CDs, score sheets—and the assets of cultural production were ceded by inaction or executive fiat, to "foreigners" to reap the profits of our labours. We missed the boat in encouraging local participation in the process at that point. The international industry in cultural marketing was a void to persons in Trinidad and Tobago. Those trying to breach were called traitors; just ask Ellie Mannette.

DC-based Trinidad-born lawyer, Nigel Scott, who specializes in intellectual property matters first expressed to this writer that this is hysteria. Scott notes that patents are country specific, and so far there is only the US patent on record which speaks to the limitation of claim by the inventors. My counter argument to him that the US represents a large potential market for the inventors' manufactured instrument speaks to the difference in vision between Trinbagonians and Americans; where we see fête and bacchanal, Americans see money! Living in America, as we do, is to be bombarded with ideas and concepts which, useful or not, represent the hegemony of US inventiveness and marketing. By example, Spain will be forever known as the birthplace of the classical guitar, whereas the innovation of the electric guitar, an American invention, has been the catalyst for the rock and roll industry and by extension, the profitable global music industry. Market forces drive industries, not legalisms.

A challenge to the patent is forthcoming from the noises of government ministers, mainly Legal Affairs Minister Camille Robinson-Regis under whose portfolio intellectual property falls. The intellectual property protocols are still being negotiated by the WTO, but examples such as this show our vulnerablty. The legal culture in Trinidad and Tobago, which is not necessarily proactive but reactive allows for effective incursions by others into the creative assets of the islands. Challenges to patents, within the statute of limitations, are always part of the process of patenting. Examples from India, backed by large Indian corporations and research centres, show how Third World nations have successfully reversed patents for cultural by-production of native assets awarded to US companies.

In our case, much of the research on using the hydro-forming process to make a pan was done by CARIRI and the University of the West Indies at St. Augustine by Clement Imbert and others in the 1970s. Their reluctance or inability to apply for a patent on their innovations may be indicative of the malaise of the society. (Petty politics and funding have been suggested.)The hysteria that Scott speaks of is a symptom of the late recognition by our citizens to the gap between industrial societies like the US and Europe and "client cultures" like our own. At the end of the day, guitar music and instrument production, and its profit are the domain of America, not Iberia. Can we be far behind in this example? Unlike Spain, in the previous example, we do not have a documented cultural heritage of centuries to fall back on. A "work of mas" had to be defined by the Swedish consultant to the government on the reformation of our intellectual property laws in the 1990s! Such are our legal minds.

Intellectual property is not something to be glibly laid bare for all-comers to exploit. This patent, Production of a Caribbean Steel Pan, is possibly the first step in a series of patents to streamline the production of the instrument to take advantage of economies of scale between handmade and assembly line production. Quality counts in the ethereal realm, quantity counts in dollar and cents: whose side do you want to be on?
Source: Campbell, Nigel A. "Pan Hysteria?" TanTan 1(2) (May 2002): 4. Print.

Since that article was written for the newsletter of the Trinidad and Tobago Association of Washington DC, "the United States Patent and Trademark Office has maintained the validity of the Production of a Caribbean Steelpan patent" by Whitmyre and Price. Them boys could start manufacturing in China for all we know, and wouldn't have to pay royalties/license fees, and swamp the world including Trinidad and Tobago with cheap instruments. If the quality up to mark for a non-professional series of instruments, market forces could see persons ask for a simple "Caribbean Steel Pan" as opposed to a local handmade artisan instrument. Pan soloists, good and bad, could flourish with the availability of cheap pans. I think that solo instrument sales as opposed to orchestra acquisitions of a whole ensemble could be an area for demand growth, although according to their website, PANXPRESS | www.steelpans.com, Whitmyre and Price are targetting school bands, a ready and eager market, I suppose. [Shit, even the domain name they using seems like an educated incursion. We miss that boat, too.]

Looking at the US Patent Office website at related patents, we see a number of instruments and methods of manufacture and teaching have had patents filed.
According to the Intellectual Property Office in the TT Min. of Legal Affairs, one lapsed for non-payment of fees, and the other was reversed due to a challenge by the Government of Trinidad and Tobago.

With reference to the G-Pan musical instrument, it is noteworthy that the owner of the patent internationally is the GOVERNMENT of TT! Compare with all other inventions noted above by independent inventors. A friend of mine who is an engineer at UTT noted that his professional colleagues at UWI, unlike the pioneers Anthony Williams, Ellie Mannette and others, didn't "pelt voop" regarding the invention of the G-pan. It is known that because those pioneers never patented their inventions, which can be characterised as elementary hit-and-miss, non-R&D, they never were able to capitalise, in a large commercial sense, beyond mere artisan wages. That, plus over 50 years to get to the point where we are now with pan are not forward thinking intellectual strategies. Trinidad and Tobago had to start from scratch. Inventor Brian Copeland says, "G-Pans are an attempt to re-establish TnT's ownership of steelpan technology." A new pan for a new century! Yes, it's just a pan, and no, it's not widely accepted, but from a legal and engineering point of view, we would be on the same stage as the Americans, Europeans, and the Asians. We would be global and intellectual. The problem is, we would not be practical.

Although G-Pan technology is a step forward from the work of Clement Imbert and others at CARIRI, the ultimate vision of its inventor is the instrument being a catalyst for growth and respect for a steelpan industry. As I wrote in my previous note, American artisans are innovating on a design by Swiss engineers, The Hang, to create variants which promise ease of use and a short learning curve, by tuning in "a pentatonic scale so that even players without any musical background can play any note combination." Placing instruments in the hands of many is a better catalyst for an industry than getting the orchestra right. The patents listed above point to inventions of music notation for rationalized music publishing, inventions of tools for potential learning applications using computer technology. Portable instruments would be another area for research by the Trinidad and Tobago inventors. The time is now, the world is your market. Go brave.
Posted by Nigel A. Campbell at 23:01