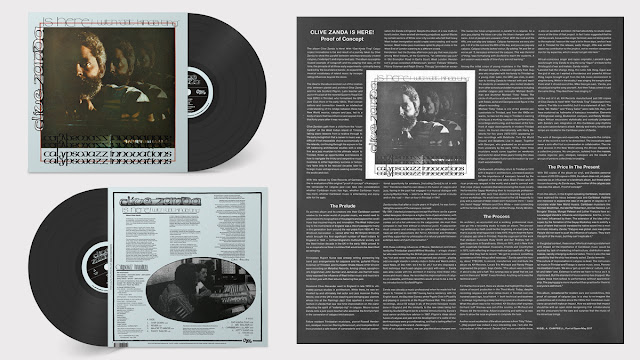 The album Clive Zanda Is Here! With “Dat Kinda Ting” Calypsojazz Innovations is the end result of a journey taken by Clive Zanda to show the parallel between extemporaneously created calypso, (“extempo”) and improvised jazz. The album is a sophisticated example of songcraft and trio playing that was, at the time, the pinnacle of all those early experiments—primarily being tackled by the local dance bands—to expand the musical vocabulary of island music by incorporating influences beyond the shore. The idea for the album evolved out of the relationship between pianist and architect Clive Zanda and the late Scofield Pilgrim, Latin teacher and jazz enthusiast at the revered Queen's Royal College (QRC) in Trinidad, who formalised the QRC Jazz Club there in the early 1960s.

Their conversations and connection towards an intellectual understanding of the bridge between these two New World music genres, calypso and jazz, led to a body of work that has influence and appeal more that forty years after it was recorded.

Clive Zanda’s path from a child from the “countryside” on the West Indian island of Trinidad taking piano lessons from a relative through to the early recognition that a career in music was a difficult if not impossible choice economically in the islands, continuing through his sojourn in the UK balancing architectural studies with a side line as a jazz musician to his ultimate return to Trinidad, threw up opportunities and lessons in how to navigate the tricky and serpentine music business to either legendary success or temporary fame only to be rescued decades later by foreign music entrepreneurs seeking something exotic and cool.

In The Moment Larnell Lewis Toronto is a multicultural paradise, more so for a number of artists and a second generation from the islands. Drummer Larnell Lewis, of Kittitian heritage is the premier drummer in the city, landing a job with Grammy winners Snarky Puppy and collecting a couple statuettes for himself. On this, his debut album, he calls on his Caribbean diaspora friends and his Snarky Puppy bandmates to add to this novel referencing of jazz from the perspective of a black North American jazz musician who is not African-American, freed from conjecture and obligations of jazz heritage. That freedom allows Lewis to explore rhythms and harmonies that suggest New Orleans (“Beignets”), gospel jazz (“Rejoice”), Latin jazz (“Coconuts”), fusion (“Change your Mind”), bebop — the solo on “No Access” is a drum masterclass — and tropical World Music (“Essence of Joy”). Memories and moments of Lewis's life are freed to inspire this joyous set of ten sparkling tunes. Dexterous and divine!