ON BEING FIRST: “BOOGSIE” AND THE EVOLUTION OF PAN

Liner notes for Len "Boogsie" Sharpe's new CD, A Tribute To the Mighty Sparrow: Len ”Boogsie” Sharpe on the PHI 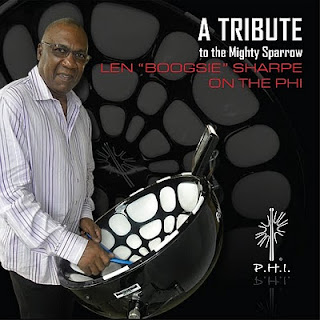 Len “Boogsie” Sharpe has reached a point in his career where accolades are superficial. He is that temperamental genius who can compose in his head without the enhanced skill of an academy-trained musician, the scores for up to eight mini-symphonies for large steelpan orchestras in one short Carnival season. In Trinidad and Tobago, the Caribbean diaspora and the world, "Boogsie" is an icon of steelpan, that self-sufficient and brilliant musician who can do it all. In that sometimes erratic mind of his, “Boogsie” can cajole melodies and improvisations from any steelpan family member, making the familiar new, and the new, unforgettable. His new instrument, the PHI is an evolution of the acoustic steelpan into the digital age, and in the hands of this master, we can bear witness to some firsts.

Shades of Vaughnette: A Review 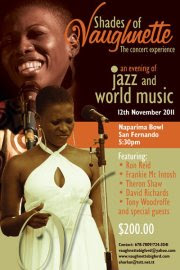 Vaughnette Bigford, forever in my mind, a SONGBIRD, delivered a magnum opus with her sold-out production "Shades of Vaughnette: The concert experience" at the Naparima Bowl in San Fernando, Trinidad and Tobago that can serve as a template for singers and performers here in these islands. Her song list touched Nat 'King' Cole and Bob Marley, and ranged from torch songs and jazz standards made popular by Nancy Wilson (An Older Man Is Like An Elegant Wine), Abbey Lincoln (Long as You're Living) to international hits originally sung by Miriam Makeba (Soweto Blues) and Tania Maria (Yatra Ta), and included enough local compositions by Andre Tanker, 'Nappy' Meyers and Ras Shorty I to make this reviewer happy. But I err on the side of caution when I sit in an audience of fans, happily, whose body language suggests that we need to listen to a lot more music from any and all genres.

Audiences are hard to please, and the suspension of belief that an entertainer takes when confronting an audience that generally gravitates towards a handful of songs and memories of songs of others, makes song choice difficult. Very accessible music like Randy Crawford's "One Day I'll Fly Away" is a crowd-pleaser, but the more esoteric song choices like "Yatra Ta" by Tania Maria are applauded with respect at musicianship and obligation suggesting at not knowing how to react. I heard an audience member commenting, "when will she sing songs that I know?" To cringe at the indiscipline of the audience is faux elitism. I understand, but I refuse to pander to nostalgia and escapism. Behave and learn. However, to know one's place in an auditorium of folks looking to be entertained after restrictive curfew limitations have been recently lifted is to be part of the joy of sharing in great talent.