Carnival: The Sound of A People - A concert review¹ 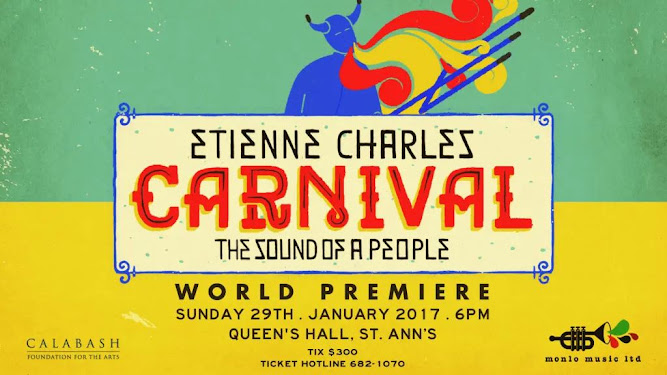 Trinidad Carnival music—its history and retention and its role in shaping our society—is the focus of musician and educator Etienne Charles' latest exploration of music in the Americas. In the context of creating increasingly interesting jazz responses to the myriad sounds and rhythms that inform Carnival music, Charles debuted parts of the still in-progress extended suite, Carnival: The Sound of a People at the Queen's Hall last Sunday.

SIDEBAR: The Mis-Education of the Caucasian

Perception is a hell of a thing. How we see ourselves and how others see us, the collective "us" is a dilemma that generations of creative people in the Caribbean had to endure. A musician opined to me that Charles' music in the suite Carnival: The Sound of a People lacked a connection to the string band music popular at the turn of the nineteenth century in Trinidad Carnival dances. The declarative stance that the still unfinished work was somehow deficient of a segment of the music of these islands also projected a notion that what was being performed and recorded stuck to a celebration of the “other “ music, the non-music, the “barbarous" music of the creole underclass.

European writers' commentary in published books and newspaper reports of early Carnival here in these islands were replete with a bias that ignored that folk music, art music and popular music stood side by side, not up and down a ladder. The African/European "contest" for power is reflected in the music. John Cowley tells us that, "String band music symbolises creole compromise in the context of African-American culture. Calypso represents part compromise and part defiance towards European perceptions, and stickfighting kalenda no compromise at all."

Etienne Charles' musical compositions, thus far, have hinted at the "multiplicity of cross-cultural influences" here. It focuses on the spiritual sustenance of ancestral music by modern practitioners. It educates the masses to the majesty of all our music in these islands. It obviates the need for foreign definitions.
With a sold-out auditorium, reflecting a similar demand as his previous concerts in 2015 and 2016, Charles was able to present in a well produced concert, the history and story of the music that serves as a foundation for the traditions and rituals that have formed our Carnival for over 100 years. What became evident, as the night moved on was that those in the audience who did not know of the history and traditions of Carnival and the musical accompaniment would be inspired to recognise that the impetus for creativity in these islands is sustained by modern folk preserving traditions and creating avenues for new audiences.

The monologue of the Midnight Robber (Damian Whiskey) served as a precursor for the evening in which the whip crack of the Jab Jab, the chant of the Black Indian (Anderson Patrick) and the screech of the jab molassie resonated, juxtaposed, and syncopated with Charles and his band of American musicians to create new music that celebrates creole intelligence much the same way as a 19 year old Derek Walcott's words in Henri Christophe did in the past. Those sounds worked to enhance the harmonic response of the composer and the improvisations for soloists Godwin Louis on alto saxophone, Alex Wintz on guitar, and the brilliant Christian Sands on piano. Augmented by the presence of Everald 'Redman' Watson, 'Lion' Osuna and young Kayode Charles, all on African percussion—djembe, dundun, conga and shak shak—drummer John Davis drove the band and the body of music to paths of enlightened surprise and elation. The rhythm never sleeps, and we are moved. 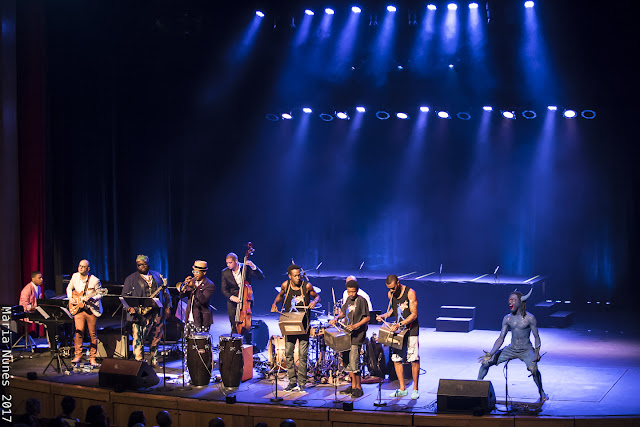 The music of the Sweet Fingers Tambrin Band of Tobago, the chantuelle's call and response of the Claxton Bay Tamboo Bamboo band, the staccato tattoo (def. a tattoo was originally a form of military music; this is war music) on the Crix biscuit tins of the 2001 Jab Molassie Band from Paramin were all given space to stand side by side with Charles' musical answer to the history of repression and subjugation of the native drum sound that has marked Carnival's evolution. A highlight for the night for many was the sublime duet with steelpan master Earl Rodney on the fourth movement of the “suite within a suite,” “Black Echo,” which charted the Afro-Caribbean response to the banning of the drum to the genesis of the steelpan.

The bawdy "walk and wine" of the Dame Lorraine (Dave Williams) and the flourish and parry of the bois man in the gayelle were the dances also given prominence by music that accounts for the numerous aspects of our rich Carnival history. The chantuelle with a horn, Etienne Charles with this production suggests to anyone with ears to hear and eyes to see that our annual modern Carnival celebrations and the events surrounding it have far to go to capture the ethos, the production value and importantly the intelligence displayed that night that local audiences need to celebrate beyond the gloss and glitter of a tourist fantasy.

The celebration of Carnival: The Sound of a People sustained outside of the hall as the lavway continued with an impromptu sing-along by a satisfied audience of vintage calypsos accompanied by Charles and the drummers. The sound of a people was festive, for jazz in the Caribbean is improvised joy. 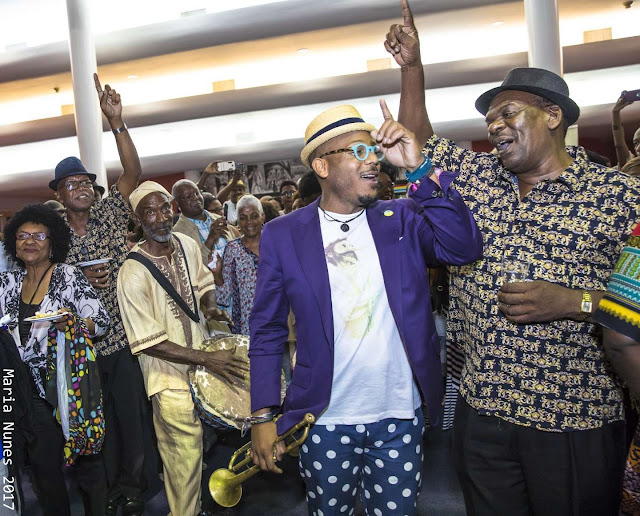 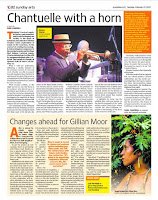