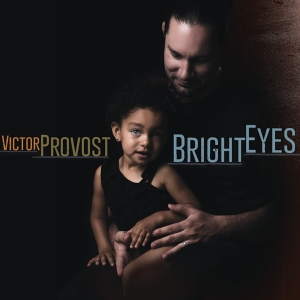 Virgin Island steelpan jazz virtuoso Victor Provost sets an optimistic tone with his second album, Bright Eyes, capturing the influence of the Caribbean more so than on his debut album six years ago. Bebop swagger gives way to a progressive jazz world fusion while still maintaining a deft touch that allows the tenor pan to ring true. On the eleven tunes on this album, Provost runs through a gamut of styles and select composers, to give the steelpan a context outside its calypso base. The obligatory homage to calypso legend Lord Kitchener is included — “Pan in Harmony” — but this album reflects Provost’s recent apprenticeship with Cuban saxophonist Paquito D’Rivera and his wider exploration of improvised tropical music. Mazurka, baião, calypso, and funky Afro-Cuban jazz all have a presence here. Guest soloists — including the aforementioned D’Rivera, alongside Etienne Charles and Ron Blake, to name a few — flavour this Caribbean jazz gumbo which swings with enough intensity to keep your attention.