A Prologue to an Island Opus - Carnival: The Sound of a People at Queen’s Hall¹ 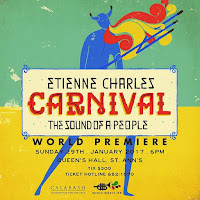 In the heat and heart of the Carnival fête season when “we doh business”, Etienne Charles will allow us to imagine what creole intelligence sounds and looks like. On Sunday January 29, he will debut and preview at the Queen's Hall selections of his newest extended piece—a planned 3-CD length oratorio—called Carnival: The Sound of a People that locates the musical response of Afro-Caribbean people within this island space to the circumstances of slavery, colonialism and freedom. Adoption, adaptation and incorporation of the cultural traditions rendered with an ear to the broader musical tradition of the Americas, jazz, has allowed Charles to produce music that recognises local audiences' penchant to move to rhythm, and a global audiences' willingness to discover and be awed by the brilliance of New World African music.

Errol Hill, in his book The Trinidad Carnival: Mandate for a National Theatre, wrote that “Carnival is inconceivable without music.” Music is indeed a central pillar of the Trinidad Carnival. Charles, with the award of a 2015 fellowship from the John Simon Guggenheim Memorial Foundation, was allowed to research and explore the music of the Carnivalesque processions, the canboulay and j'ouvert, the drum dances, the sacred and secular music with the call-and-response led by the chantwell, and other African cultural survivals in the Caribbean from pre-Emancipation to present. He embedded himself in the communities that retain the traditions of the blue devil, the jab jab, the black Indian, and in the gayelle of the stickfighter to capture the rhythm and song of the kalenda and the caliso.

In modern times, Trinidad Carnival has inspired plays, original dance, prose from our best playwrights, choreographers and authors. It has also created and inspired music that seeks to translate the emotions, the history and the psychology of the people and their dreams and actions as players on this grand stage called Carnival. The catalyst for composition for Carnival: The Sound of a People was different from his recent San Jose Suite. The broad quest was condensed to focus on the specific. Observations of the wider Americas, its people and communities gave way to capture and reaction to the sound and vision of a people, in real time, unravelling the “multiplicity of cross-cultural influences” that drive this nation and this region to make a mas' and to make a music. Resistance and persistence, in this case, is specific to that impulse of ours to mimic and to parody imposed order, and to absorb, re-enact and create the theatre that honours the indestructible courage of ancestors.

Charles: “I have hours and hours of field recordings that I had to sift through. I wanted the real shit; to see it and to fuse the sounds with the sights and the history to make music.” These hours of field recordings, this raw ritual music, serves as a bed for the new improvisations that Charles would layer. This melodic addition is not to be construed as cultural appropriation, but part of our hybridisation process of music creation in the Caribbean. The method of composing new music over original music from a source was explored by Paul Simon on his classic Graceland album; music based on a “rhythmic premise.” Like Simon, Charles went back to the United States to record with some of the most gifted jazz musicians including Grammy winners Ben Williams on bass and David Sánchez on tenor saxophone. The work on Carnival continues: “Fourteen movements of the suite have been recorded, eight more to write...only gonna be able to play eleven in Trinidad for the sake of time.”

SIDEBAR: The inescapable destiny of comparison 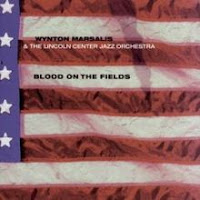 Although not trying to shadow every achievement of his spiritual mentor Wynton Marsalis, the parallels of Carnival: The Sound of a People and Marsalis’ oratorio Blood on the Fields are inescapable. The long form musical composition, the rise to excellence unbound by the rules of the recording industry, the swagger and temerity to write about ourselves unashamedly with an eye and ear towards full comprehension.

When asked about his current predilection to the long form suite, Charles responded by saying: “Compositions, that's how you engrave your name in history. I mean, I'll still play covers live and maybe record a few, but composition puts you in the books. Not always gonna be called the “Insert Title Here Suite”, but for historical stuff it works. To date, Charles has composed Folklore in 2009 and the just-released San Jose Suite as musical suites.

Juxtaposition of native Carnival culture with the jazz response is intriguing. Charles notes that he “wanted to be cerebral, but rooted in the folk element while being as vivid as possible with the harmonic colours.” Among the new improvisations garnered from the sound of the drum is the four-part “Black Echo”. Charles says it represents “the European attempt to suppress our communication and Black musical expression.” It is the African-Caribbean response that also illustrates the evolution, in Trinidad, of the drum sound. The first movement is the “Banning of the Drum” with the resultant initial tumult mirrored in hard bop musicality. The second movement is on the “Tamboo Bamboo”, which was the local response to banning the drums. The third movement celebrates the “Iron Bands”, the precursor to the final movement, the “Steelbands”, the “audacity of the creole imagination,” as described by researcher Dr. Kim Johnson.

There are many more musical stories like this that illustrate and signify that the creole imagination was more than audacious, but was determined never to be suppressed or forgotten. There have been dozens of books and scholarly articles as well as hundreds of post graduate theses and a few journals written about Trinidad Carnival, its history and the psychology, the design of the mas' and its relevance, its music.

In the music heard as a preview to the upcoming live performance, Charles has encapsulated a meaning of what and why we continue to do this thing called Carnival that is more entertaining and enlightening than dry words in a thesis can capture. Music has that power to educate if we are willing to allow ourselves to listen and absorb the elements of rhythm and subliminal messages beyond sound. Charles says, “it tells the story and we have plenty stories to tell, everything we didn't learn in school that we should have.” This is a grand subject, an opus writ large.

Carnival: The Sound of a People adds to that Carnival story collection as an antidote to the trivia that sustains an industry. It addresses what is becoming a problem with the society at large: the dumbing down of art to fit a carnival mentality that suggests that how we wine is more important than what we are wining to. The balance between art and artefact, between materiality and memorabilia is recognised and Etienne Charles responds with a daring that fits a new vision for native music.

A parallel anecdote: VS Naipaul wrote a large book on the subject of Trinidad, The Loss of El Dorado, which when published was criticised by the literary editor of a very important paper in London who told him that he “only should have written an essay because it wasn’t a big enough subject.” Naipaul wisely noted that his critic was “a foolish man.”

West Indian men and women of art and scholarship—Andrew Carr and Andrew Pearse, Errol Hill, JD Elder, Peter Minshall—also deem fit the subject of Carnival to be more than an “essay.” Our Carnival must be writ large, not as a snippet. In that important way, Etienne Charles, the chantuelle with a horn, with the forthcoming concert and album in the future effectively covers Trinidad Carnival, its traditions, the diaspora response and the people who make Carnival our gift to the world. 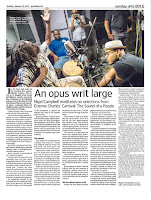