HomeGrown, an album by Dominant Seventh CalypsoJazz Band - a review¹ 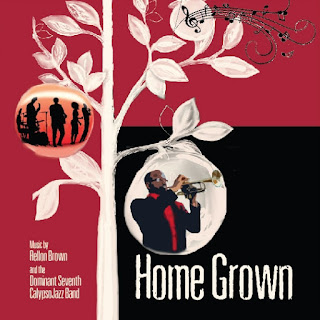 In 2016, the idea of a calypso jazz band recording reminiscent of those pre-combo dance band records of the late 1950s to the early 1960s comes as a shock to the tendencies of modern local musicians to follow the faddishness of this new generation of music consumers. Trumpeter Rellon Brown along with his young Dominant Seventh CalypsoJazz Band, on their new CD HomeGrown, peel back the pomp and gloss of current tropes to resurrect the idea of creole dance band music. The music, recorded live in the studio, serves as a kind of instigator for moving hips and feet, and as a beacon of native pride in what worked and what did not.

Recently launched at a concert at the Little Carib Theatre, the album's fare runs the gamut of progressive post bop on Trackers to cloying songcraft on a cover of the Ralph MacDonald-written classic Just the Two of Us. The broad mix gives the impression that this debut its trying to be all things to all men. It certainly fulfils the ambition of showcasing local song writing and indigenous musicianship; Ralph MacDonald was the son of early Trinidadian calypsonian Macbeth the Great and identified with his heritage.
Five original instrumentals—four of them by Brown—plus two songs complete this seven track CD. The melodies of the instrumentals have a jaunty, familiar feel. We know them, and we can dance to them. The improvisational conversations between members of the horn and woodwind section—Brown on trumpet, Joshua Pasqual on trombone and Jeremy Paul Chatoor on sax and flutes—provide a cerebral counterpoint to the high spirited musicality that defined dance bands locally for decades. The depth of the improvisational language here is just sufficient to allow for average listeners to remain engaged without alienating them.

The album opens with an interpretation of Andre Tanker's Forward Home that establishes the tone of the creole horn section found in these islands. Unlike Cuban horns, for instance, there is an earthiness in the timbre to which local ears have become acclimatised. The arrangements, all by Brown, set a pattern of an opening statement by the horns to address the song's melody, and then it's off to the races as musical conversations between players coax out ideas and showcase skills. Songs with titles like Catspraddle, and Sweet Talk deliver on the variety and commercial promise of the indigenous songbook.

Idea and ambition aside, the thing that is a recurring theme on this album is the uneven quality of the musicianship and the singing. Elizabeth Ince sings two tracks on the album, the aforementioned Just the Two Of Us and her own love ballad Patience. Brown describes this song as one that “speaks of the journey of a young woman towards finding the man with whom she is meant to spend the rest of her life with.” Ince's thin voice does not convincingly convey the strength needed to endure this transformative journey in which life takes her and twists and turns, folds and bends, and moulds her to perfection for her unseen love.

The horn-based arrangements and performance, while creatively superior to the status quo of calypso bands, veer towards a kind of discordant tone that one would have hoped to avoid on its debut. Sterling piano playing, however, is heard on this record from Adan Hagley, a Berklee Music College graduate. There is also excellent drumming from Dareem Chandler who provides the swing and rhythm when needed to position the album effectively in both genres of jazz and calypso.

This album represents the antidote to synthetic music in these islands, where the obsession is to mechanically compose and produce music that makes us dance without thinking. Despite calypso's focus on the singer and the lyrics, calypso music served as a kind of template for native musicianship. Simple in melody, narrow in the range of harmonic ideas, local musicians parleyed this music to the world for over a century. It was a skill that made modest careers here beyond the slings and arrows of the harsh battlefield of global music tastes and dictates.

Dominant Seventh CalypsoJazz Band is focussed on portraying our homegrown talent and skill as best as it can. In an increasingly open musical space for buying and selling, being good is simply not good enough.

A debut should make a dominant statement beyond the ordinary. HomeGrown, simply packaged and long in germination, sells an idea, instead of an idea and the perfect execution of that idea. One looks forward to the follow up album for growth. 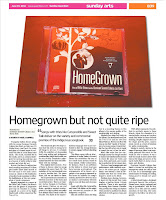