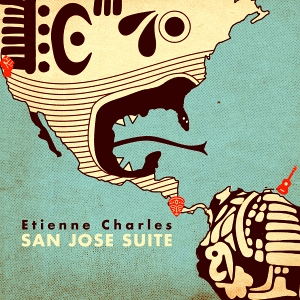 Jazz in the wider Americas is more than improvisation that engages the blues and swing, but an evolving exploration of sounds, rhythms and cultural tendencies that inform the music that is the definition of freedom. San Jose Suite, Etienne Charles' sixth album, is a mature contemplation of this Trinidadian trumpeter's wider encounters with the elements of creole music in the New World. Drawing inspiration from three San José cities in the Americas—Costa Rica, California and Trinidad—Charles re-tells the stories and histories of those communities, its people and their commonalities, with jazz that is both rhythmically diverse and harmonically expressive enough to never be cliched. “Cahuita”, “Boruca”, “Revolt”, “Speed City” are musical statements of keen observation, celebratory reflection and musical adroitness. This album is also a signal to the listener that jazz in the 21st century is in the hands of a burgeoning trumpet pioneer charting modern directions much like Armstrong, Davis and Marsalis before him.