Some years later, I am living in Washington, DC, and I am fortunate enough to meet Raf. The nerd in me would regale him with the stories of that theme song. We connected. We discussed music, the business of music, all kinds of music available to us in the US capital. We were good. Something happened by the time Raf was putting together his third album, the little known Universal Rhythm in 2002. We fell out over a design commission for the album jacket. We never spoke for months, even foolishly avoiding each other in public spaces. Something had to give. When he released the album at Zanzibar On the Waterfront in late 2002, I went to that launch. There he was just across the bar. Just so, we each extended our hands, shook hands silently, then went on with a discussion of a recent album release by Monty Alexander, like nothing happened. Crazier things have happened in my life. How does one explain why some relationships last and others wither away and die?

In 2011, Raf worked again with Eddie Bullen to record Majesty. I had an opinion. I never published it. It was a well recorded album, but it did not move me. I would assist, in a small way, in making the Majesty Live concert happen in 2013. I had said once before that, "the subjective role of the critic to analyse objective realities and contextualise them either locally or absolutely." I offer a reality check. 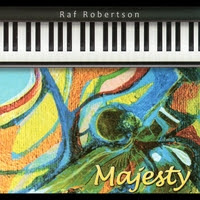 Raf Robertson's new CD Majesty sounds like it has been done before. A rehash of old ideas, not fully formed. It is the result of low cost production of potentially great ideas. Music reviews should always be in context to the audience, to the location, to the language. Objective analysis of local music is falsely broad-brushing opinions that are static and can't accommodate innovation. Comparing Raf Robertson to Monty Alexander or Chucho Valdés because they are all Caribbean-born pianists is narrow, and misses the point of balancing all views. The adage that "in a land of the blind, a one-eyed man is king" is true, a maxim even.This album, although well recorded, hasn't moved thematically to focus the majesty of calypso any further, or that should be sharper than what Branches did back in 1994. A wider palette of local composers is used on this album, but the result, while popular, is harkening back to a blander time.

Once back in Trinidad, I joined the local jazz community as a promoter with Production one Ltd, producers of Jazz Artists on the Greens, and later a writer and publisher. Raf, a fount of information on jazz and a living example of an artist who had travelled the globe and engaged with musicians and audiences there was skeptical of recent initiatives to drive the music sector. He has "been there and done that" already—that famous phrase by former Trade minister Vasant Bharath about the HR solutions for the still-in-progress CreativeTT experiment—in a number of contexts. As recently as August this year, we had conversations at the MusicTT-sponsored stakeholder engagement exercise in Arima. Here, present among a young cohort was a legend in recording and performance, and nary a person knew of his significance. One lesson from the legacy of Raf that has been missed by a new generation is the acknowledgement of pioneers, despite genre. We have to do better.

In the last few months, Kaiso Blues Café, run by his buddy Carl Jacobs was a new spot for performance and ideas, liming and musical exchange. Trevor's Edge in Tunapuna too. His birdsong concerts at NAPA and at Queen's Hall celebrated excellence in local music, and brought us in contact with travelled musicians as well as young lions who were part of the Berklee College scene. His brilliance was to share the brilliance of the world outside our bubble and to show us that we have a long journey ahead of us beyond mediocrity and adequacy. He had "been there and done that."


I finally got the opportunity to put into hard copy a periodical—Jazz in the Islands—on this music we both loved; calypso jazz, Caribbean jazz, both here in these islands and in the diaspora. He was featured in the first article of the magazine, re-printed here:


Rafael “Raf” Robertson is a major figure in the development of calypso jazz, and an influence to a generation of musicians who came after him, all seeking to make the native dissonant and joyful at the same time. One can discern from his biography that he is serious in his intent. He is an accomplished jazz pianist, composer and recording artist specializing in calypso jazz and improvisation who has performed professionally for well over three decades. He continues the fusion of the vocabulary evident in jazz with the stock melodies and rhythms of Trinidad calypso. His Caribbean reference and perspective have distinctively shaped his playing: he calls himself a minimalist. His music—a direct reflection of his spirit—is about creation and expression, happiness and sensation.

The lad from La Brea began the studied discipline of formal piano lessons at the age of eight, did the combo dance band scene as a teenager, sideman duties as a keyboardist in dance bands during his sojourn in Europe in the 1980s lead to bandleader credits later there. The syncopated rhythms and lively spirit embodied in both jazz and the Caribbean situation began to shape the vision of this musician. His return to the source of inspiration would lead to gigging and touring with music mogul Eddy Grant, and launching his own exploration of the body of music here in the islands ripe for harmonic reinterpretation.Caribbean jazz was, for him, just a natural extension of the music and the many influences that he encountered up to this time.

Four albums later—Just Teasin’, Branches, Universal Rhythm and Majesty—Raf continues to push interpretive boundaries with a new approach to the marrying of the steel pan and so-called conventional instruments. The ideas never stop and neither does his music. Look out in 2015 for the new calypso jazz.

It's 2015. Raf was working on a project with Pamberi Steel Orchestra. He played for me some music ideas he had for dance music reminiscent of early 1990s Herbie Hancock that he had done with Gregg Assing of Champion Sound Studios. He was innovating with rhythms and sounds. He was creating. He was collaborating. He was playing. He was playing music. He thought he just had the cold!...

Friday morning, another SONGBIRD called my phone at minutes to 4:00 am—much like in 2011 when another titan and pianist, Dave Marcellin passed—to ask if I heard about Raf. My mind jumped to the worst. He couldn't come my recent production of ETIENNE CHARLES presents Creole Christmas. He was then in the hospital. He thought he just had the cold?...

What madness is the universe doing? In a week when Orisha drummer Junior Noel and steelpan tuning legend Herman "Guppy" Brown have both left this mortal coil, God is still playing tricks on Trinidad, taking our musical icons in graps and bundles. It happened before. Sadly, we must contemplate a world without masters who continued to produce music that defined us outside of the fete and jam. Studied intelligence and continuous effort at charting a newer direction will be the job of a new generation. Here's hoping that we succeed as you did Raf. Rest well Rafael “Raf” Robertson, 1952 - 2015.