A busy Saturday night it was. Cool and dry, thank God. The 15th of November was busy with the simultaneity of entertainment options for the like minded.
Jazz! Song! Performance! Fête!
An inspiration. A revelation. An investigation. A celebratory coda. 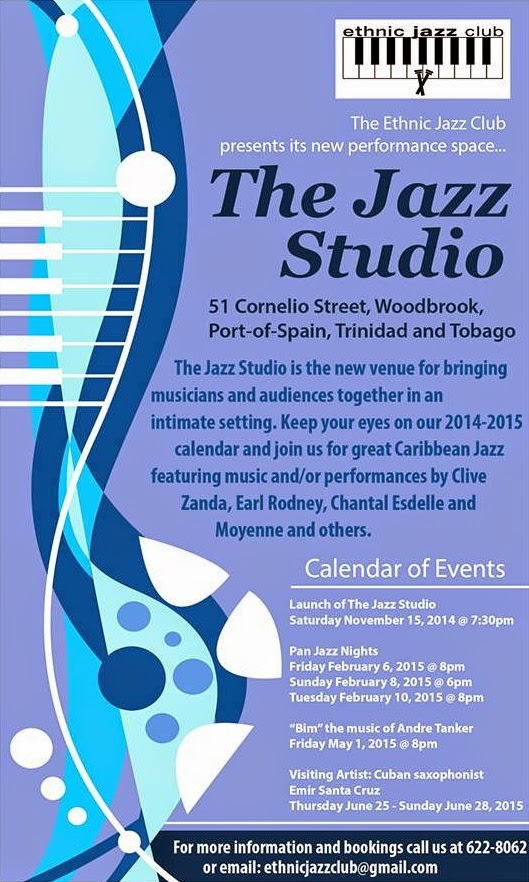 Chantal Esdelle is doing what few others have dared to try by launching a jazz studio—a home cum studio for creativity and improvisation—in her grandmother's home. The jazz salon is alive. I remember the Boothmans—Mike, David, Roger, Pops—had private jazz salons in their home. An effort to bring a select audience into direct contact with the creative energy of the local jazz musician is an inspired endeavour. The jam session, "the jazzman's true academy" according to writer Ralph Ellison, was being allowed to take root again after a few years of stasis. It serves as the jazz equivalent of networking events and that aspect is wanted if we are to build a viable industry beyond simple talent.

There is a storied history in American jazz of patrons like Pannonica de Koenigswarter, the "bebop baroness" hosted jam sessions and informal salons in her hotel suite in the upper East Side on Manhattan with Charlie Parker and Thelonious Monk among others in the 1950s, and choreographer Judith Dunn at her loft in Chinatown in the mid 1960s. The 6th Avenue Flower district area in New York was the space for the significant jazz loft sessions in the late 1950s to early 1960s where music legends just jammed. Most significantly, musician Elvin Jones famously hosted a weekly jam session in his home, while Ceil Taylor in the early 1980s hosted sessions in his apartment creating and expanding with his colleagues his avant garde oeuvre.

In my short investigation of what drives Esdelle, she noted to me just before the launch event, that she knew there were no spaces for jazz musicians to regularly interface with an audience, and more so, options for improvised creativity were limited in the island. Her grandmother's Woodbrook house would solve those problems, and serve as a business venture for her Ethnic Jazz Club. Beyond the living room, a growing crowd is gathering summoning the queries of "where they go fit if rain fall?" Like in a time gone by when one television served a barrack yard community, heads were peering "around corners and through doors and windows" to get a peek at the action. Esdelle's band Moyenne was holding court. The music flowed, and it was good.

During this encounter with music, short as it was for me, we were blessed with the presence of Clive Zanda, acknowledging his role as kaiso jazz pioneer. Other musicians like Richard Bailey, Theron Shaw gathered. Was this a success or a sign that the space is circumscribed by walls and metaphorical barriers? Was tonight's studio launch the beginning of a viable venture? One hopes that the t's are all crossed and the i's are all dotted in case she encounters the wrath of some super effective civil servant on a vendetta. Music fans need this space. Jazz needs this space.

Cutting short the creole African jazz of Chantal Esdelle and Moyenne, I had to run and catch up with my Guyanese SONGBIRD Ruth Osman who was having a free "preview" concert at MovieTowne's Fiesta Plaza a fortnight before her paid concert. Why would I buy the cow, if I getting the milk for free? Let that sink in. To my surprise, and I guess to her management's relief, the gig ended up being just Ruth and jazz master Raf Robertson on piano. The fate of accidents, the accident of revelation. A series of disappointments and blunders allowed for this unlikely partnership to happen. Brilliant musicianship brings out the best in any vocalist worth their salt. Diva Glenda Collens reminded me that brilliant musicianship ably supports great talent.

Given the history and turbulence of a number of Ruth's prior music partnerships, this simple duet of voice and piano showcased Ruth in a better light than I have heard her in recent times. The hurly-burly of the Plaza on a weekend isn't normally satisfied by quiet yet great music. A raucous musical event commands a rapturous audience here. The silent elegy to jazz vocal sophistication as evidenced that night by her pensive but beautifully direct rendering of the local songbook was met with persons vacating chairs mid-song. Their loss.

What goes around, comes around. This apologetically shortened performance of "unrehearsed pieces done on short notice," according to Ruth, recalled her first calling, a folk chanteuse with that elastic voice that can deliver a plaintive lyric. In this guise as jazz vocalist accompanying improvised piano, those who listened would have received an object lesson in transformative performance. Jazz is surprise and the revelation of a new song stylist, stoic in the face of an indifferent audience but connected to the song was a joy to hear. Collens called her a lioness that night. Is there another surprise in store for listeners at her concert at month's end? I'll be shocked if there is not.

I later slipped into the final few minutes of the set of the Dayo Bejide Trio at the Alliance Française. Sitting in with brothers and percussionists Modupe and Baba Ayinde Onilu and Joshua Salcedo on bass was ace reedman Anthony Woodroffe Jr brewing a kind of magic that excited my ears. Significantly, I saw an audience of some 15 souls, all paying customers I hope, taking it all in.

The creolised African vibe that permeated Chantal Esdelle and Moyenne's set was upended by a more direct rhythmic echo to that ancestral Africa as provided by the Onilu brothers. Once a rhythm was set, Salcedo found an ol' funky Negro groove that set a key and scale for Woodroffe to improvise on. Sax and flute had conversations with the organic beat. Modupe's marimba challenged Salcedo's urgency to make feet tap, to move waistlines in chairs and bop heads. Geezanages! This is jazz in the tropics: rhythm, found sounds, improvised joy!

Even better was the impromptu conversation with the musicians after the gig. This being the last performance for their season, giving way to parang, soca and Carnival, one learned of the idea that they could make it if they spent time more time in the woodshed. The determination to continue to play can only be met with admiration on my part. Young and with opportunities abroad, this new cadre of young lion jazzists opt for a frame of reference that suggests that long journeys begin with small steps. The rhetoric of failure is ignored here.

I ain't being rude or planting bon mots for recognition. Jacqui Morris' birthday party was actually held at 3Canal's new space, the Big Black Box—a black box in the heart of the red light district—and was a cool down from the excitement of seeing new possibilities forming from the mundane and under-appreciated.

Going home at the end of it all, I was struck by the similarities: the sustained effort towards acquired excellence, the continued lack of public support in a sizeable way that would suggest profit and the dismissal of essential administrative and business overview in deference to a kind of relaxed status quo of "whatever will be, will be." Profits don't come from solidly hoping for unfulfilled dreams. Work still has to be done.

I have complained before about the idea that artists, despite the economies of scale that exist here in Trinidad, can be more concerned about the amount of box office receipts or the size of the performance fee than meeting and possibly exceeding that audience's expectation. The simple economics of supply and demand also suggests that the small intimate performances, while a boon to allowing continued contact with a potential audience wreaks havoc on the idea that "we are a star!" Too soon, buddy, too soon.

There are possibilities that emerged on this wonderful Saturday night. Tonight's final birthday celebration was recognition of meeting a kind of milestone, a half century of life. As some say, from here on in, it's all downhill. This annual rite of passage does not always arrive at a satisfactory denouement, but this Saturday night's music adventure bore the hallmarks of an active live scene that, for now, is sill under-subscribed. We still have work to do. We also still have time.