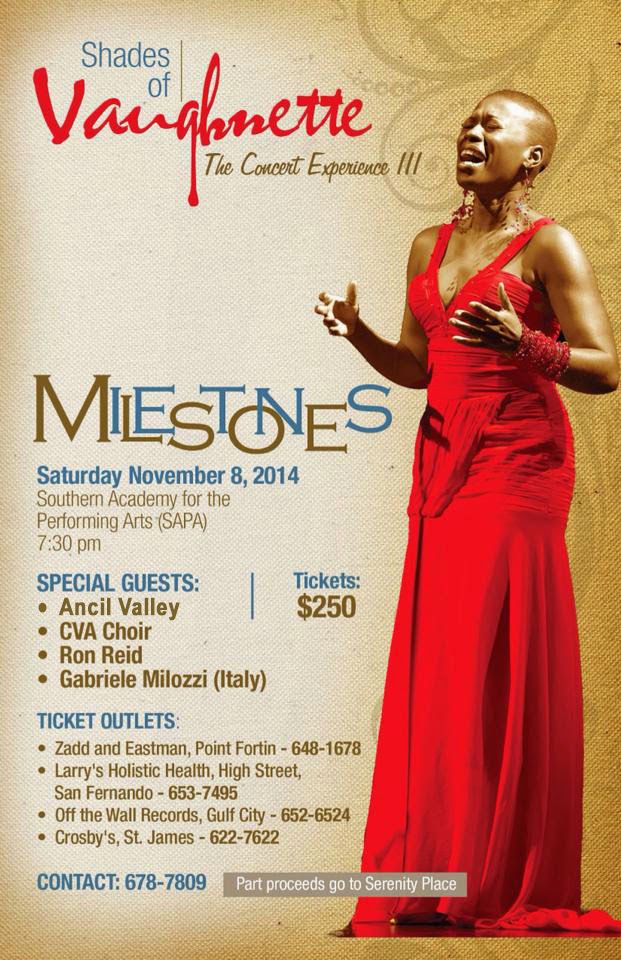 Resplendent, as always, in the couture of southern design team, Zadd & Eastman, Vaughnette Bigford made a successful return to her annual concert series, Shades of Vaughnette, at the Sundar Popo Theatre at the NAPA South Campus in San Fernando after a two-year break for the recency of motherhood. With a mix of local and jazz/R&B covers, Bigford reclaimed her status of the premier jazz stylist in these islands whose palette knows no geographic boundaries. She is well known for handling the American jazz songbook, international hits in many languages, and especially for her take on the local song catalogue and suffusing these tunes with the dissonant harmonic tones of jazz. And that night, Saturday November 8, she did not disappoint.

This year’s show, the third in the series and subtitled Milestones to celebrate a decade as a professional performer follows a pattern of expanding the local audiences' understanding and appreciation of a global repertoire of songs, and reinforcing the idea that the local song—whether it is calypso, soca or island pop—can become a celebratory anthem beyond a narrow Carnival season cycle that predominates the industry. Opening the show with a nod to American jazz singer Carmen Lundy with a cover of her hit “Wild Child”, Bigford soon engaged the senses with a phonetically accurate reading of French chanteuse Annick Tangorra’s “Lolita Fleur Creole.” Language is not a barrier for the appreciation of great songcraft.


As her voice warmed up to the job of putting the Bigford stamp on these songs, one recognises that superlatives can’t suffice when there is work to do.  As always in a Shades of Vaughnette concert, and especially so in this one, her ability to take the familiar jazz instrumental piece and add lyrics—sometimes unknown, sometimes original—to make the song personal and to add that emotional connection is an ability that a listener should never take for granted. Bigford debuted what could be a new direction for her career. She put her original lyrics to Clive Zanda’s kaisojazz classic “Fancy Sailor” that put the tune into another category. That skill, seemingly effortless, is one that is awe inspiring.


Ah woke up Carnival Monday and head in Port of Spain
Ah walking up Charlotte Street, chipping up to the beat
Sweet Carnival is here
And people in the mood
See dem jump in Port of Spain
In sun or rain, all man feeling good

There, I spot a burst of colour and it heading straight my way
A thing of splendour so bright, is fancy sailor in sight
Resplendent in their form
A thing so beautiful
And they chip with they stick in they hand
They dance...

Chorus:
See dem jumping to the beat
See dem chipping up Charlotte Street
Fancy Sailor looking sweet
With they stick in they hand
They dance...

This is inspired prosody.

A challenge for any artist is to move an audience beyond mere applause out of obligation for effort or skill to ovation for meeting its expectations and surpassing them. Ella Andall’s “Missing Generation” took on another hue of pathos with a shadow theatre dance performance of embattled youth projected on the backdrop as the mournful lyricism of the song was echoed by a new spare arrangement by Michael “Ming” Low Chew Tung.  Bigford balanced this with a surprisingly upbeat funky version of the late calypsonian Merchant’s early soca hit “Be Careful” that interpolated Michael Jackson’s “Another Part of Me” into the harmonies to joyful effect. Both songs took on a new relevance once shorn of the familiar musical tropes of “island music” to become that thing we call jazz.

...
To conjure up the idea that a Mighty Shadow song can become a pensive jazz song is a reflection of the skill and canniness of the musicians that surround Bigford. Guest musician, Italian saxophonist Gabriele Milozzi provided counterpoint to guitarist Theron Shaw on a hauntingly beautiful rendition with just voice and those instruments of Shadow’s “One Love” that was the epitome for many that night.

For this production, her other guests came to add to her eclectic mix. Trinidadian professor at Berklee School of Music, Ron Reid on double bass made easy work of anchoring a rhythm section that “swang.”  He performed a duet with Bigford of Carol King’s “You’ve Got a Friend” that elegantly showcased her voice and his technique. Digicel Rising Stars winner Ancil Valley proved to be a great singer and a comfortable entertainer. The CVA Choir together with her chorus of Afiya Athill, Aneesa Paul, Genisa Nora and Sade Sealy gave life to "He Lives in You" by Lebo M from the musical The Lion King.

Tone and phrasing, beauty and presence are hallmarks of Vaughnette Bigford. As a performer and show producer, she epitomises an ideal aspirant to break the shackles of indifference of a country in the throes of creative economy growth. The moniker "jazz" adds another shade of disinterest among potential audiences in this country. Shades of Vaughnette III garnered local South sponsorship in the main, and the effort to move her recognition beyond Trinidad much less the southland is noted with ignominy. This concert was a start to reverse those struggles. We should all be on the lookout for this rising star.
SETLIST
© 2014, Nigel A. Campbell. All Rights Reserved.
Posted by Nigel A. Campbell at 15:48