All Star Tribute to Ralph MacDonald – a concert review¹ 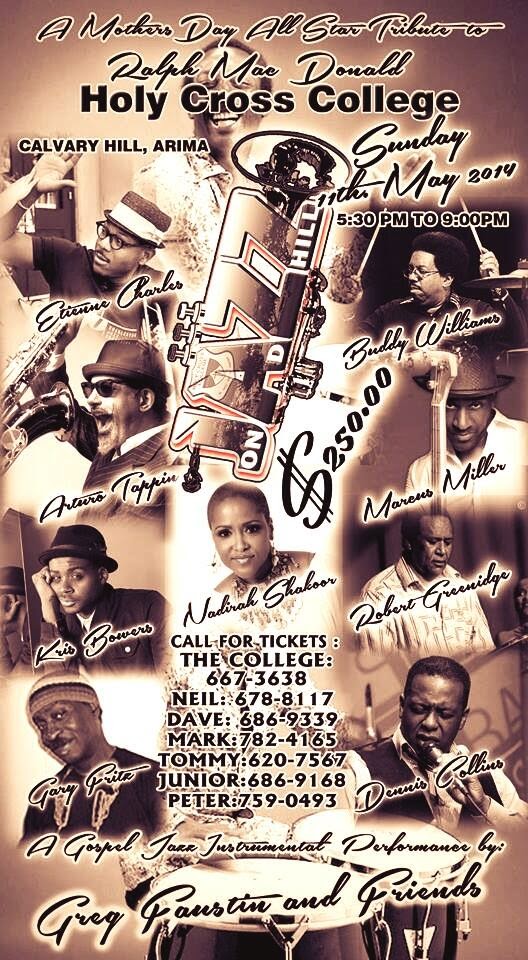 On a picturesque plateau above Arima overlooking the distant Caroni plains, the Holy Cross College Alumni produced a jazz event for the ages—Jazz on D Hill—featuring an All Star Tribute to Ralph MacDonald on Mother’s Day, May 11. The music of the late Trini-by-blood musician, composer and producer resonated in the night as some of the best and most famous musicians in jazz covered the songs spanning MacDonald’s solo career from the 1970s to his untimely death in 2011 and beyond.

The most significant inclusion in this All Star grouping was Gary Fritz, MacDonald’s cousin who had the joyous responsibility of recreating the percussion parts that audiences have grown accustomed to over the years from MacDonald. The classic “Jam on the Groove” has a percussion break that utilized toy hammers that exemplified how the mundane can become extraordinary in the hands of a master. For the disco hit, “Calypso Breakdown,” MacDonald’s son Atiba joined the All Stars to play the iron and enhance the “engine room” to joyous ovation. At that point the rains came down, but the magic lingered.

The audience that evening were enjoying a world class performance of great music at a premium value. Marcus Miller and Buddy Williams exemplified superior standards of performance that showcased their ability to stay in the background and provide solid rhythm, but when called upon to solo, as Miller was on “Mister Magic”, to do so with skill and audience-tingling energy. The sound of his bass was clear and defined and stood out among the other instruments in the band that was underserved by poor sound reinforcement.

In this music memory-fest of important covers, Arturo Tappin’s tenor saxophone performed the role Grover Washington fleshing out the melodies on songs like “Winelight,” “Just The Two Of Us” and “Mister Magic,” while Alex Wintz played the familiar rhythm guitar grooves of Eric Gale on these songs and blazing through a searing solo on the Roberta Flack-Donny Hathaway hit “Where is the Love.” Tappin and Charles traded licks on most tunes emphasizing that the Caribbean groove extended beyond percussion and rhythm into melody and jam. Nadirah Shakoor and Dennis Collins reprised their roles from the MacDonald CDs as vocalists on the latter hits “Kiss Kiss Kiss” and “Trippin’” as well as those seminal songs as “Remember Kitchener” and “Just the Two of Us.” Shakoor’s take on the slow ballad “Generations” from his posthumously released CD of the same name was new to local ears, and hampered by the rains that were a frequent interrupter to an uncovered audience. Charles reminded his audience that night: “Rain was Ralph crying tears of joy.”
Etienne Charles had crafted this tribute band and the idea of a tribute band tour prior to the passing of MacDonald. Says Charles: “Some years ago, I was invited to do the “Coca-Cola Generations in Jazz Festival” covering the music of Ralph, and the idea that Dennis Collins and I had before Ralph’s passing became real as we moved towards doing the tribute with those great musicians who worked with him.” Charles’ connections in the US music industry and MacDonald’s legacy helped to coalesce this band, and the opportunity to perform in the land of his heritage was not to be avoided.

MacDonald was described by Minister of Arts, Dr Lincoln Douglas, earlier in the evening as “… a true ambassador of things Caribbean.” Those melodies and percussion breaks over the decades have thrilled and entertained audiences here and abroad. Mother’s Day was an evening of memories of the songs and rhythms that define Caribbean people, and on a weekend that also hosted South African music icon Hugh Masakela in concert, this island was a mecca for masterful music.