This Is Élan Parlé: A concert review 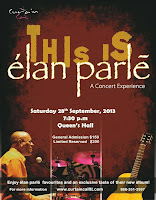 Michael “Ming” Low Chew Tung and his band/brand Élan Parlé proved why they are a necessary force in the music industry here in Trinidad and Tobago on Saturday 28 at Queen’s Hall. A two hour performance of original instrumental tunes and arrangements interspersed with revealing conversation, interesting music lessons and funny stories made for an entertainment package that continues the high standard set by show producer, Curtain Call Productions.

Admitting that this was the first “full concert” in seven years, the band with a new line-up of players delivered on the promise of one explosive night of Caribbean jazz fusion. Culling compositions from his publishing catalogue going back to the debut CD, “Tribal Voices” in 2000, Ming commanded an ensemble of seasoned “young lion” musicians to play with the easy elegance that defines the Élan Parlé sound.

The band, with Ming on keyboards anchored by bassist Rodney Alexander, percussionist Modupe Onilu and long-time drummer Richard Joseph, allowed guitarist Dean Williams and woodwind specialist Anthony Woodroffe, Jr. to solo and improvise on the many compositions that celebrate a kind of Caribbean aesthetic that is both global in its sound and interpretation and original to its roots in the music and rhythms of this region.  When Williams and Woodroffe were “trading fours” (alternate brief solos back and forth over the same music segment) on “Are We Grooving Yet?” there was much joy and ovation. We in the Caribbean know how to enjoy ourselves, and this music provided an apt soundtrack to the evening's merriment. The leap of faith by the performer that this audience would “get it” was confirmed.


The songs including “Lift Off”, “Outta da Blue” and “Sambo” were the kinds of contemporary jazz fusion experiments that make audiences—certainly the one present that night—take notice and importantly, validate those songs with commercial appreciation. The merchandise table was solidly packed with patrons getting their hands on the band’s seven CDs, and apparel on sale, that being an indication of the continued potential to make new fans after more than a dozen years in the business.

For the first decade of this century, in T&T, Élan Parlé released six CDs that added depth to the canon of local compositions and instrumental jazz that is unsurpassed. Ming also executive produced albums by others—Theron Shaw, Candice Alcantara, Clifford Charles—certainly solidifying his place as the premier architect of that third generation of Caribbean Jazz artists locally after the initial Scofield Pilgrim generation (Zanda, Errol Ince, Ralph Davies) and the protégés of the Scofield generation (the Boothman brothers, David and Mike, Raf Robertson, Annise Hadeed). The New School of Ming’s generation includes Shaw, Charles and Sean Thomas among others and were students of higher learning in music who finally challenged the status quo in the new century, and recorded prolifically.

A highlight of the night for many was singer Kerwin Trotman singing the superb jazzy arrangement of David Rudder’s “Calypso Music”. Calypso music and by extension local music in the hands of Ming is special! Our low appreciation of “special” over “traditional”, however, can stymie even the most optimistic. Ming regaled the audience with the perils and tribulations of performing for local promoters who have their own ideas about what audiences want to hear from a musician. The inescapable “eat-a-food” performance that local artistes of vision have to acquiesce to in order to continue their craft was surrendered that night though.

Trotman likens Ming to the late Ralph MacDonald; a superb and prolific song writer and producer who was also a sideman on many recordings and live performances. Like MacDonald, Ming disappeared musically into the band coming out to chat frequently with the audience and play too few solos. The evolution of the sideman to band leader is a phenomenon regular to T&T as the shallow pool of local jazz musicians offers a rotating opportunity for public accolade.

We can place this concert in context of the bigger picture for live music in T&T. Coming on the heels of another jazz concert by Anthony Woodroffe Jr a few weeks ago at the Little Carib Theatre featuring covers exclusively, with a similar aggregation of players, the uninitiated jazz music fan may be hard pressed to differentiate between concerts. The set lists both featured contemporary jazz fusion of the local songbook and solos by the same players, save the drummer and percussionist; a concert of covers as brilliantly performed by Woodroffe compares similarly with a concert of mainly original music by Élan Parlé, with the same Woodroffe handling many solos. It is two sides of the same coin here in T&T where the dearth of jazz musicians of a high calibre may stunt the potential to evolve the music in the many directions that jazz improvisation would suggest. Hope is eternal with Élan Parlé though.

The band debuted two new tunes from the forthcoming release, “I Am Élan Parlé”: “Port of Spain”, a sonic reference to Chick Corea’s classic “Spain”, and “East and Bull” a Caribbean celebration on the Turkish music scale with Middle Eastern rhythms and the risqué meaning of Turkish delight. Élan Parlé continues to mine the global influences to create music that has an audience, deceptively small for now—the Hall was about half full—that has the potential to sustain an industry. (Setlist)
Posted by Nigel A. Campbell at 11:43