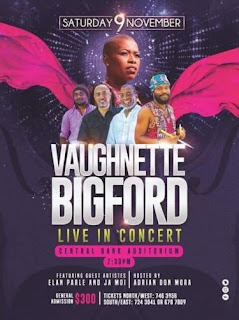 For those who are counting, Vaughnette Bigford sang 21 songs at her sold-out Live in Concert event at the Central Bank auditorium in Port of Spain on Saturday 9 November 2019, and in those 21 songs, the world outside of Trinidad and Tobago opened up to us.
That world of music that has become a staple of Vaughnette's concerts is alive and accessible. We, as audience members and patrons who are open to the possibilities of future engagements with The Creole Chanteuse, have an opportunity, and dare I say, an obligation to engage with the higher sensibilities of our nature as we recognize excellence.
21 songs took us on a journey that we have made before. The jazz, local and World Music songbooks of decades were again laid open for us to enter with an assurance that we would come out on the other side enlightened. That journey in 2019 held the surprise of discovering the new beyond the vapid leitmotif of the familiar “pop songs done jazzily.” 21 songs of enhanced harmonic promise were laid bare. Ennui was eschewed, elation ensued.
The Arab-Andalusian folk song, “Lammā Badā Yatathanna” and the African lament “Oluwa (Many Rains Ago)” were married with interpretive dances (to the surprise of Central Bank Auditorium ushers) to become celebrations. “Soweto Blues” juxtaposed with “Inner City Blues” contrasting, or maybe equating the South African apartheid experience with the African-American dream upended; the blues are not happy.
Two sides of the music of 1960s book-ended the concert; Wayne Shorter’s 1966 hit “Footprints”, a  jazz song that has allowed for many lyrical options was her opening salvo for the show. The Beatles’ “Come Together” was given its rock ‘n’ roll bearing near the end as if to challenge our perception of Vaughnette’s role of “jazz” singer; she is more than that. That jazz, rock and the music and melodies of Africa and the Middle East can all exist in the same show, which in the minds of many did not veer into excess, is a testament to Vaughnette’s complete understanding of her audience.
A half dozen soca, calypso and early 1980s Island Pop songs were re-harmonised for impact beyond a wine and jam. We also reminisced on the reimagined pop and R&B songs of the 1970s and ‘80s, we identified with the Brazilian vibe, real and resembled, of the songs of Sergio Mendes and Natalie Cole respectively, we discovered the utopia elaborated within Carmen Lundy’s “Wild Child”. We got it all!
Social media was soon alive with the effusion of praise for the production, for her powerful personality, for her Zadd & Eastman onstage fashion, for the connection between the music and the soul that quickly and easily moved adults to emotional extremes. The show gained a prominence that exceeded any problems onstage or behind the stage. The phonecams that night captured the surface highlights of the show but could never capture its spirit. A deeper reflection sees why we cheered mightily.
In this business, one has to be aware of one's surroundings and the people who exist within. Paying it forward was a theme that resonated that night both high and low, in spades and subliminally. Talented teen Gabriella Henry showed why Vaughnette’s role as talent scout in her community was not in vain; a Central Bank Auditorium debut to a full house and lusty applause thereafter is how we measure the benevolence behind her beauty. Élan Parlē and the Ja Moi Kollekssün, her collaborators in music and the business of music were allowed space on her stage to be more than guests, more than just peers.
However, significantly, on that night Vaughnette bared her heart to a young man. Rowan McEwan, tall and elegant, his wide smile expressing his joy and our awe, put a trombone to his lips and rendered an audience to tears. His autism was no longer a reason for social disconnection, but for connectedness beyond our surprise. His duet with Vaughnette on the standard, “Nature Boy” brought us closer to a kind of humanity that still recognises that excellence is more than perfect notes, more than flawless rhythms, but the audacity of spirit that sees no obstacle but simply performing with tangible effectiveness to move us all to ovation.
Vaughnette Bigford Live in Concert superseded expectations of performance norms by moving closer to our dream of seeing beyond the mediocrity that is deified here by many as “a great show.” Just a great show is not enough, this was the continuation on a path towards an external frame of reference that guides dreamers in these isles, a standard of performance that is the new normal for her and still the goal of others. In those 21 songs, for a few hours, we moved beyond the boundary of our existence to hear and feel the world outside our door. And we liked it!

An edited version of this review appeared in the Trinidad and Tobago Newsday on 23 November 2019 as 'Vaughnette takes fans on riveting journey'
© 2019, Nigel A. Campbell. All Rights Reserved.
Posted by Nigel A. Campbell at 23:39