April is Jazz Month in Trinidad too¹

In a month of many entertainment options labelled “jazz”, the first weekend showcased some of the best music performances heard in these parts for a while. April has been recognised as Jazz Appreciation Month in the United States via the Smithsonian along with the UNESCO sponsored International Jazz Day culminating at month’s end with global jazz events including Trinidad.

Pianist Master Gunnery Sgt Robert Boguslaw, and double bassist Gunnery Sgt Eric Sabo—of “The President’s Own” US Marine Band—along with saxophonist Jeffrey Wills of Nashville, Tennessee were here in T&T for a second year to give jazz performances and do music workshops on the first weekend. These skilled musicians spoke the language of jazz that has not been heard locally for a while with performances reflecting the styles of Thelonius Monk, Chick Corea, even handling Etienne Charles “Santimanité” with technical aplomb. Mixing standards with original compositions, the solos captured the swing music ethos majestically with the virtuosity of the solos of a high calibre. Boguslaw's piano style is worth emulating locally as an immediate template for expansion of the genre.


Wynton Marsalis in his book Moving to Higher Ground, wrote: “The jazzman's objective...was solely musical: Through his improvisation, he wanted to take people deep into his actual feelings and his world.”  Marsalis uses the idea of participatory democracy to define the conversations between musicians. At the Bandstand outside President’s House on a cool Thursday evening last week, the American musicians’ interaction with local pan maestro Len “Boogsie” Sharpe exposed a reality we chauvinistically overlook: never discount the necessity for higher music education including classical training for superlative music performance. Improvisation is a key element in jazz and a skill in which certain music rules are followed. To say that Boogsie does not have a gifted musical ear would be stating untruths about a man who is a kind of musical genius, a savant of the steelpan. Unless the intention was free improvisation devoid of all rules, the “clash” of the steelpan lead-voice with the chords progressions was apparent and notable. What that says about Boogsie and his world, it may also say about the T&T audience. 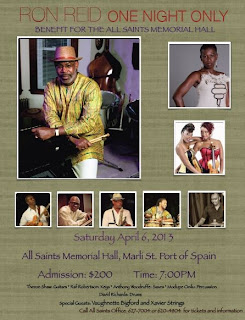 Juxtaposing, on stage, musicians of different technical capabilities, or more importantly, different experience levels can be an eye-opener (ear-opener?) to local audiences accustomed with the status quo. It can also, with repetition, improve the performance of the lesser experienced musicians. Boston-based Trinidadian musician Ron Reid, in concert for One Night Only at the newly refurbished All Saints Memorial Hall on Saturday, marshalled his supporting local musicians to a superlative performance mode unheard by these ears for a very long time including the recent Jazz Artists on the Greens.

Ron, an associate professor of contemporary writing and production at Berklee College of Music, transformed an audience as well as his fellow musicians. Josh Grossman, Artistic Director for Toronto Downtown Jazz, which produces the annual TD Toronto Jazz Festival recently wrote: "...entertaining an audience means ensuring that they enjoy themselves...Engaging an audience, on the other hand means drawing them in – guaranteeing that that they’ll like the experience itself, if not what they experience.” Arranging and playing many compositions from the local canon, including his own catalogue, Ron “directed” performances by local jazz stalwarts Raf Robertson, Theron Shaw and Anthony Woodroffe that drew tumultuous ovation from a satisfied audience He pulled engaging performances from the Xavier Strings that matched the mood and tempo of a jazz ballad with the sonority of a violin without the accustomed harshness of a bow with too much rosin.

Local jazz musicians who for years have performed live, created and distributed recorded music as a part of the nascent music and entertainment industry here in T&T represent the acme of music talent to some observers. I reckon there are about ten musicians of repute who get the majority of gigs and performances. The possibilities for technical and stylistic evolution are stymied by the lack of interface with visiting musicians exposed to more ideas and skills. These two events showcased the potential for more cross-fertilization and its resultant impact.

For the rest of the month, a varied event calendar will feature gigs ranging from the intimate to the large festival of Tobago Jazz Experience at month end. Next weekend, Jazz under the Stars features unsung acts too long off the main scene.  Young pianist, Jeanine Ruiz and her band Hyjnx will gig at Martin's on Woodford Jazz & Piano Bar mid-month. Every Saturday evening, the Women in Jazz series at Fiesta Plaza, MovieTowne will feature singers interpreting the jazz vocal style. A feature of the week of jazz in Tobago is Jazz on the Beach at Mt Irvine bay, this year featuring Caribbean stars Etienne Charles and Arturo Tappin. The final event is the local International Jazz Day event organized by the Jazz Alliance of Trinidad and Tobago at the Hilton Hotel.