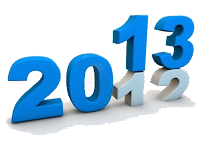 In the dwindling days of 2012 when there was a hubbub over the creative industries and the planned state enterprise model for its growth, we had the pending fall-out over the government's counter-strategy of using its favoured soca son to drive the local music industry. These conflicting regimes by separate ministries to make our music global ignored the fact that the industry of music happily went along, dynamic and fluid, all the time improvising to the changes in the nature of attribution (copyright), distribution and now global exploitation. Improvisation is a key element of jazz, and here in TT, that niche of the local music landscape reflects some of the bigger issues that plague and guide that industry. 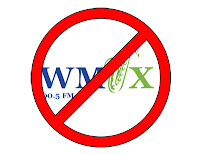 The demise of the only local terrestrial station dedicated to jazz, WMJX 100.5 FM and its subsequent conversion to an online format a couple years ago would have put the nail in the coffin of a less cherished musical heritage. Jazz and certainly its Caribbean variant, however, continue finding its centre via concerts and a few new CD releases by those dedicated artistes challenging the music genres outside of soca, calypso and parang.


The original template for Caribbean jazz festivals, designed as magnets for American music lovers-cum-tourists viewing pop and R&B acts is rapidly passing into the irrelevance of abandonment. The annual Jazz Artists on the Greens (JAOTG) in Trinidad in March, and the Tobago Jazz Experience (TJE) and Jazz on the Beach, both in Tobago in April are proof of this. TJE—four years old in 2012—is an example for the growth of a destination travel model that Trinidad was looking to create outside of Carnival to no avail with events like the forgotten World Beat Festival. It is not necessarily bringing many foreign visitors, but moreso Trinidadians looking for a quick musical feast of the oft-repeated design of foreign superstar with local supporting act.

JAOTG and Jazz on the Beach at Mt. Irvine harbour the notion that Caribbean Jazz can be the signal for a new local music appreciation and have for ten years and six years respectively done exactly that. Holding fast to the mantra “jazz is freedom,” rules are dispensed with, and anything goes. The aping of a foreign model of performance and style are eschewed in favour of influences and rhythms from up and down the Caribbean.

All these shows are proving more and more that Caribbean acts are fan favourites. Bajan saxophonist Arturo Tappin on a rainy Sunday night at TJE, and earlier Michelle Henderson of Dominica at JAOTG delighted audiences there and showed a standard of playing, singing and importantly, a standard of performance—that nuanced connection that artistes have with an audience—that have not fully blossomed among the many singers and musicians marketing themselves here as jazz artists.

Fear not, all hope is not lost however. A new dimension in the evolved music business in TT is the idea of forgoing the professional promoter in favour of doing it oneself. Artist-produced concerts—Kyle Noel and David Richards had successful shows in 2012—are putting younger talents that have evolved the tradition of local jazz into the spotlight. The zeitgeist of a generation or two ago placed local music in the milieu of jazz with calypsoes being played by our equivalent of the jazz big band, the brass band. Young musicians are now dealing, with varying success, in the challenges of interpreting or in some cases re-interpreting the canon of local and foreign musicians. Young trumpeter Etienne Charles continues to lead the charge of this brigade both here and abroad.

Two other highly recommended artists pursuing with determination a greater appreciation of the language of jazz are saxophonist/flautist Anthony Woodroffe, Jr. and singer Vaughnette Bigford. Separately, they performed the annual ritual of the live concert as music theatre for the uninitiated. 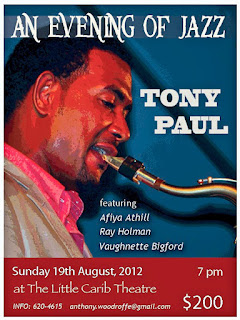 When I began microblogging this review of Anthony's show some months ago, the first lines I wrote were:


"Anthony Woodroffe and his swinging band of musicians delivered a fine set of groovy 'saxy' music, to coin an Arturo Tappin word...The band was swinging. Did I say that already? Yeah, they were that good."

Anthony Woodroffe, Jr., who is admittedly not a songwriter, can coax new meaning out of the evolving new jazz standard. With his sixth annual “An Evening of Jazz,” in August, he deeply mines the songbooks of modern jazz saxophonists to replicate the sound and tone of a Bob Reynolds, a Kenny Garrett or a Grover Washington, Jr., yet providing enough improvisational skill to keep the audience interest piqued.

I want to place this concert in the context of two others he had in the past; one at La Casa de Ibiza in June 2012—a noir vibe mixed with familiar Grover Washington Jr. impersonations—and another at DR!NK Wine Bar in May 2010—a search for influences from Miles' young acolytes, Kenny Garret, Chick Corea, and Bob Berg. What I am noting is the evolution of a Young Lion Generation jazzist. This is Trinidad's gain. The constant desire to reinvent is the impetus of a jazz musician. Anthony is doing that with a sound grasp of the rudiments of music theory gleaned from his undergraduate years at University of Leeds to his current position as Instructor at UTT. Playing frequently, however, brings on the discerned progress in the soloing and playing. For him, "it's always about moving forward and always improving."

The song choice for this concert challenged both musician and audience. Anthony Woodroffe has said to me frequently that his goal is to go for melodies which might be familiar only to the jazz connoisseur but bouncy enough to tap a foot to; Roy Hargrove's Strasbourg/St Denis and Kirk Whalum's Groverworked & Underpaid represent funky departures from the standard canon of the young American jazz musicians that he emulates. This strategy allows him to play to an improved level and, importantly, to cultivate an audience. This sixth self-produced concert proves to me that he has built a large loyal audience who gets it!

Comfortable in his performance mode on the stage of a full house Little Carib, Anthony in 2012 assumes the leadership among reedmen in Trinidad and Tobago of his generation and before. His Caribbean colleagues Arturo Tappin, Luther François, along with a host of others: Elan Trotman, André Woodvine, Jesse Ryan, et al represent an opportunity to rekindle the notion that beyond a Caribbean presence, saxophone jazz is cool. We await the recordings in our lifetime. (Setlist) 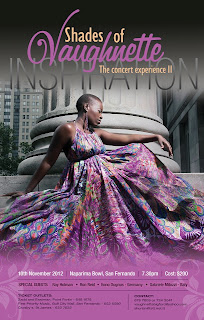 For the second consecutive year, Vaughnette Bigford delivered a superb concert experience—Shades of Vaughnette...The Concert Experience II: INSPIRATION—that epitomises a high production standard too unfamiliar with artists here. My default setting for productions is always to supersede any previous effort. Last year, despite an audience more concerned with style over substance, Vaughnette struck a note of daring and some may say, has exalted the prestige of the jazz singer in the pantheon of female vocal stylists here. This year was no different: musicianship, fashion, and yes, style! Art won out again.

The easy familiarity of this seasoned performer in her "town" made for a night of ovation. A shift to the voguishness of the popular song brought about the crescendo of sustained applause. Her tone and phrasing informed the local songbook of Shorty I, Ray Holman with a sonority probably not considered by the composers, but one which tests the limits of the song structure to a possibility that our music can be global without the wail of a soca singer seeking succour in foreign producers.

Vaughnette is not a natural R&B/pop singer, and as such her interpretation of that genre's music had less impact in my ears than the emotional reinterpretation of the Merchant classic Superpower arranged by Michael "Ming" Low Chew Tung with a 5-part female vocal harmony support. A masterclass of transformative performance. The next rung of the ladder for this singer, and many others of this generation's jazzists is the recording and effective distribution of their art to new ears. Sadly, there is a dearth of new recordings to support the idea that Vaughnette and her peers represent the future of a music industry outside of Carnival music.

I have noted elsewhere that location and presence are necessary for wide popular accolade by our artists. Two productions in the "cultural soul of the south" posit the possibility of new opportunities as a next step in this artist's evolution. "Let's get ready for a Port of Spain production next, Vaughnette. An audience awaits. The world is your oyster." (Setlist)


The paucity of new local jazz recordings in 2012 and the diminution of local copyrights by fewer composers adding to the jazz canon signal the potential for a reversal of the blossoming of new avenues for the business of jazz. 2013 could evolve as a watershed year. Government’s intention to embolden the creative industries should awaken the spirit of creativity that took place between WWII and Independence. The resilience of this music called jazz in all its variations suggest that there’ll be more to listen to and talk about in the future.
© 2012, Nigel A. Campbell. All Rights Reserved.
Posted by Nigel A. Campbell at 01:31