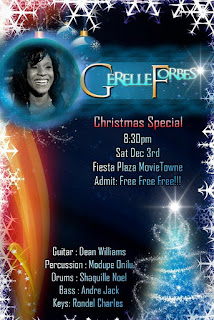 
David, who plays drums for, among others, the Clifford Charles group says that music arranging is something he does, and may I say, very well. On the sound of the first note by his crack band (Rondel Charles and Kedron Isaac on keys, Shaquille Noel on drums, Modupe Onilu on percussion, Andre Jack on bass), it was apparent that the milieu which these musicians were accustomed was the gospel music of the United States. The majority of the band is from the Seventh Day Adventist church, and we the audience were treated to that highly syncopated cadence of the R&B-tinged gospel that is a hallmark of the Black church in America, the template for the local SDA music. The music tingled. It uplifted. It "swang." The SDA Church has drafted a Philosophy on Music, which says among other things: " Music should be prepared, practiced, and planned." They adhered to this dictum well. Tight and nuanced arrangements that capture the spirit of gospel (only in America is there a differentiation based on skin colour), rhythm to die for courtesy the superb young drummer Shaquille Noel, a name I would want to hear more often in popular music in Trinidad and Tobago, and an almost flawless performance gave my ears a treat I have not been privy to for far too long in secular music circles here. Gerelle's boast that "these were some of the best musicians in this country" was not hubristic.

A quote from the text of the Guidelines Toward An SDA Philosophy of Music (1972) says:


Harmonic Treatment. Music should be avoided that is saturated with the 7th, 9th, llth, and 13th chords as well as other lush sonorities. These chords, when used with restraint, produce beauty, but when used to excess distract from the true spiritual quality of the text.

Take 6, according to Quincy Jones," the greatest vocal ensemble on the planet," are raised in the SDA church, and no longer adhere to this possibly outdated dictum. Not following that lead either were the ladies of voice who harmonized economically on "O Come, O Come, Emmanuel". God bless them. Those who missed out, missed out. David Richards is a bright revelation in another sphere of the music business here, and we would be well advised to seek out more music from this young musician. The music spaces in this country are niched beyond practicality, but musicians can and should be able to span genres devoid of mandated philosophy or tradition, I believe. "Music is universal" is an adage that works for me, and the ability to hear a lot of live music is one of life's pleasures as we move from season to season beyond the boundaries.