On Lionel Belasco, or The Politicization of Culture in Trinidad and Tobago 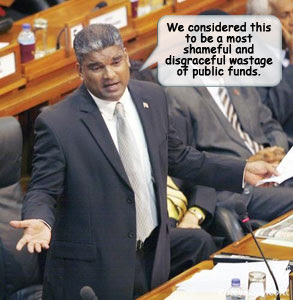 Attorney General, Sen. The Hon. Anand Ramlogan has shown his ignorance of Trinidad and Tobago culture. In making a claim that there was a misuse and abuse of public funds by the PNM via UTT in the purchase of 10 Bosendorfer grand pianos, including the Special Edition Johann Strauss model, (inspired by the instrument on which the great master wrote his compositions, and ultimately placed by former Prime Minister Manning at the Diplomatic Centre for recitals,) the following exchange of words were recorded by the Parliament Channel [
Ed.: Link to Hansard.]:


Sen. The Hon. Anand Ramlogan: "...for those of us who are accustomed to the steel pan, the Dohlak and the Maghera and the “riddim” section; for those of us who are accustomed to listening local cultural music, the Bosendorfer Piano is the Rolls Royce among pianos in the world...My learned friend from Port of Spain North/St Ann's West [Patricia McIntosh, MP] is saying: “What is wrong with the piano?” I say nothing is wrong with the piano, but the day you could play a good calypso or chutney on it come back and talk to me...I want to see my learned friend take a piano and sit down and play a good chutney or a good kaiso on it...all we know 'bout it is ah lil' Bob Marley music, ah lil' kaiso, calypso and chutney. That is what we listen to, but this grand piano...We consider this to be a most shameful and disgraceful wastage of public funds...There was absolutely no need in a country that boasts of an indigenous culture that is proud of its calypso heritage and the steelpan. There is no need for a country like this to purchase 10 grand pianos." [My emphasis.]
—January 12, 2011. Anand Ramlogan, Attorney General. Parliamentary Debates (Hansard). (Port of Spain: House of Representatives): pages 382-384.


Oh, for shame, that this lawyer turned arbiter of cultural taste and aesthetic for "we" the people of Trinidad and Tobago does not have a clue who could "play a good calypso" on a piano. Let me tell this man whose musical spectrum starts at Marley and ends with "kaiso", we have a history of recorded calypso, Carnival music, Antillean music, all performed on piano by the likes of Lionel Belasco, George Cabral, Boscoe Holder and stretching into the modern era with Ed Watson, Ralph Davies, Clive Zanda, Raf Robertson, David Boothman, Dave Marcellin, Ovid Alexis, Pelham Goddard and Ming to name a few. For the record, Alan Lomax and Emory Cook were recording Indo-Trinidadian musical heritage in Trinidad in the 1960s.

There was heavy innuendo in the exchange of ideas between Manning at his subsequent press conference and Ramlogan in Parliament on what is good for Trinidadian tastes and what is wished for to create a sense of aesthetic superiority in these isles. The notion of elite arts and "posh" culture has been used as a political tool since before Eric Williams was Prime Minister, and words have been written by, among others Nobel Laureates Derek Walcott and VS Naipaul defending the appeal to higher art. The rise to power of Eric Williams saw the phenomenon of new Ministers of Culture supporting the folk arts (seen as entertainment) to the exclusion of "serious" arts. Derek Walcott wrote in 1970 in his essay "What the Twilight Says":


In these new nations art is a luxury...Every state sees its image in those forms which have the mass appeal of sport, seasonal and amateurish. Stamped on that image is the old colonial grimace of the laughing nigger, steelbandsman, carnival masker, calypsonian, and limbo dancer. These popular artists are trapped in the state's concept of the folk form, for they preserve the colonial demeanour and threaten nothing. The folk arts have become the symbol of carefree, accommodating culture, an adjunct to tourism, since the state is impatient with anything which it cannot trade.
Walcott, Derek. "What the Twilight Says" in Dream on Monkey Mountain. New York: Farrar, Strauss and Giroux, 1970.

Things have evolved since then as the state now supports via an Entertainment Company and a Film Company, the varied arts as a professional enterprise. But, give this politician a choice of serious art and a jam session, and see which one have Anand doing a "turn"!

Before Walcott, VS Naipaul wrote in 1960, in his seminal travel book "Middle Passage":


Culture is, in short, a night-club turn...This talk of culture is comparatively new. It is a concept of some politicians in the forties, and caught on largely because it answered vague, little-understood dissatisfaction some people were beginning to feel with their lives of fantasy. The promotion of a local culture was the only form of nationalism that could arise in a population divided into mutually exclusive cliques based on race, colour, shade, religion, money.
Naipaul, VS. The Middle Passage. (New York: The Macmillan Company, 1963) 71-72.

Politicians tread into matters of culture at their own peril. Worse yet, those in the Culture Ministry. Marlene McDonald and Junior Regrello told a national audience that NAPA was not constructed for "that kind of thing", chutney. Current Minister, Gypsy said of the two NAPAs: "We would never be able to pay for these things, and it matters not what activities you keep in here. In terms of financial return, we will never be able to do that." Now we have AG Ramlogan suggesting that all we listen to is a "lil kaiso and a lil [reggae]", with the implication that nothing else matters for the folk, or should matter! Opposition Leader, Dr. Keith Rowley himself adds to the litany of innuendo laden commentary on appropriate cultural symbols with this sarcastic objection of local rock band Orange Sky accompanying Tourism minister, Dr. Rupert Griffith to India: “They send a rock band, they gone to rock India. At the tune of hundreds of thousands of dollars, they gone to play rock music in New Delhi...And that is what will bring tourists to T&T.”

Both aforementioned Nobel laureates noted that politicians equate culture and the arts generally with the requisite "pleasure in living up to the ideals of the tourist brochure." An extension of the brochure idea is the "carnival mentality" codified by Lee Kuan Yew in the 1960s that, in this place, implies that music to dance to is more important than music to listen to. The mass appeal of the fête and jam leaves diluted the memory of piano players who recorded and moved local music onto a global stage, and extended it by improving and improvising the native rhythms and sounds on a non-native instrument. These traders in art sought new markets and customers who were NOT "accustomed to the steelpan and the dholak and the majeera and the rhythm section." History will absolve the rhetoric of the cynical politician who never stepped outside the "wall." We can't be so lucky to forget.