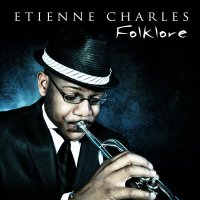 For the first three weekdays in August, young lions in the sphere of jazz music in Trinidad preened and pointed the way for musicians of other genres and generations to duplicate. On Monday, Aug 3, Etienne Charles launched his new CD Folklore at a listening party at the jazz-themed restaurant, Satchmo's in Woodbrook. In anticipation of a short live set, the crowd grew larger than the dining room that hosted it as the night moved on. Etienne, and fellow young lion, saxophonist, Tony Woodroffe, Jr., recently back from studies at Leeds University, played their instruments with a maturity belying their ages.

Etienne's music represents the genesis of a transformational moment that comes in generations. Back in 1956, Sparrow and his Jean and Dinah marked that kind of generational shift that propelled calypso forward through the shortened zenith of the Belafonte's Calypso age a year hence. Trinidad and the diaspora are richer for Charles' and Woodroffe's sojourn into the musical spaces that exist for local musicians who are brave enough to go into them without fear of the rhetoric of failure. Folklore is an impressive achievement, and solidifies in my mind that Etienne is at a place musically where most local musicians have not even seen much less entered. Things can only get better with more interaction with this artist of both profound intellect and subtle style who uses the canon of local rhythm and melodies to create the new. 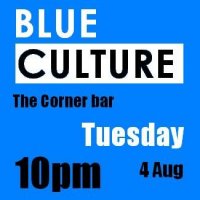 A wiser scribe than I once wrote that jazz is "the sound of surprise," and I was surprised by the following night's performance of Karl Doyle's Blue Culture at Corner Bar. The energy was sustained over an hour with a mix of originals and covers that featured the aforementioned Woodroffe and Charles together with Mikhail Salcedo who is becoming the star soloist on the tenor pan. That youthful energy and large crowd were signals to me of a changing of the guard in the local jazz scene. The ultimate surprise was of course the consistency and maturity of the jam! When the "cats" wailed, the crowd wooed; a musical call and response that grew with every song. There can be no backing down at this point for Karl and his crew. Blue Culture have shown that jazz fusion can be entertaining and popular. Kudos to them.


Jazz is predominantly about the primacy of the individual voice. Jazz requires its musicians to make something new each time they take the [band]stand...Not "interpreting" in the way of classical musicians, but inventing themselves anew each night.
Williams, Richard. Jazz - A Photographic Documentary. New York: Crescent Books, 1994. 15. Print. 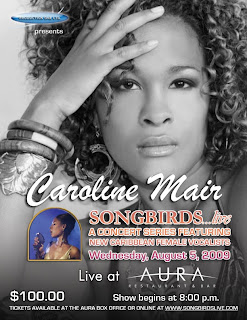 Caroline Mair represents, to some, a challenge because of her sound, her look, her personality. Debuting the SONGBIRDS...live series by Production One Ltd at AURA Restaurant, Caroline performed, for a sold out paying crowd, a set of both original and covers of ballads from the canon of Broadway to Marley. No one can fault her for stage presence. Either you have it or not. Backed by Dean Williams and Modupe Folasade Onilu, she purred, crooned and delivered. There can be no looking back to a time when the female voice was relegated to backing vocals. This female voice is interpreting the music in ways that are unfamiliar or even uncomfortable for audiences that chauvinistically hold onto examples that are, ironically, not of their making. This individual voice that can both echo a remembered tone and sustain an original searing note has the potential to breach the boundaries of performance spaces globally. It is an identifiable sound that we can call our own.

I must compare these three performances with others I have attended in the week prior. August started good! Crowd. Excellence. Innovation. These young lions rule. Everyone else, watch out. These performances, as a group, stand as a declaration of a new age. Both in terms of crowd support and performance, that generational shift I have been speaking about is here and now! One could easily identify four "generations":
To be at the cusp of change in the culture of a country is to be blessed. The American experience showed the movement from swing to bebop to cool and beyond. Our challenge is to recognize and reward the vanguards at the gate. It is now possible for artistes to easily record and distribute their performance and original output. To validate that output with critical acknowledgement and financial support is the goal of modern audience. To do that over the generations is to be conscious of one's place in a civilized society.